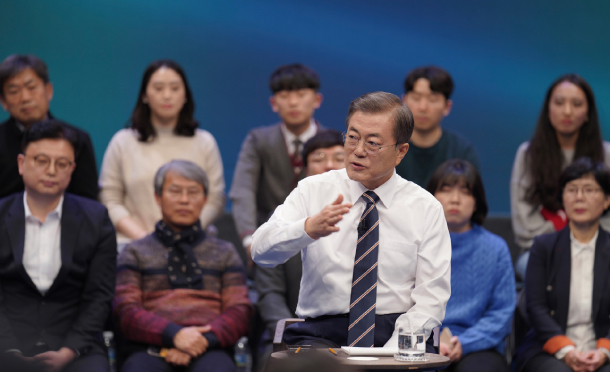 President Moon Jae-in, center, attends a town hall meeting in Seoul with 300 people Tuesday night to discuss his policies and vision for the second half of his term. [YONHAP]

President Moon Jae-in said Tuesday night that his government will try “until the last moment” to avoid terminating an intelligence-sharing pact with Japan this week - but stressed that everything depends on Tokyo lifting export restrictions on Seoul.

As Moon spoke to 300 selected members of the general public in a town-hall-style meeting at the MBC headquarters in Sangam-dong, western Seoul, in which the audience was allowed to freely ask questions about his policies on live television, Moon gave zero hints that his administration would retract its decision to withdraw from the General Security of Military Information Agreement (Gsomia).

Gsomia formally expires at Friday midnight unless South Korea recants its decision to walk away.

Moon, unlike other South Korean government officials, did not explicitly say Tuesday that Seoul will recant its Gsomia decision if Tokyo ends its export restrictions first.

But he said both issues had to be resolved together and spent most of his response about Gsomia castigating Japan for “inconsistently” claiming South Korea damaged mutual security trust as a rationale for export restrictions yet still wants to maintain Gsomia, which is based on mutual security trust.

Moon, however, said his government will still cooperate with Tokyo on security issues even if it does walk out of Gsomia.

“I want to tell you that we did what we obviously had to do,” said Moon. “In terms of security, the South Korea-U.S. alliance is the essence, but the security partnership among South Korea, the United States and Japan is also very important. We intend to cooperate with Japan as much as we can on security. Even if Gsomia expires, we will seek security cooperation.”

If Japan doesn’t want to end Gsomia, Moon warned, it will have to resolve the issue “along with” its export restrictions.

Seoul announced on Aug. 22 it will withdraw from Gsomia following Tokyo’s removal of South Korea from a list of preferred trading partners.

Signed in November 2016, Gsomia is renewed automatically every year unless either of the two countries decides to scrap the pact, in which case it must provide the other with at least a 90 days’ notice. The United States is urging South Korea to remain in Gsomia, but Seoul says Japan has to end its export restrictions first, which Tokyo has refused to do. It wants Seoul to first admit that the forced labor issue has already been resolved.

On North Korea, Moon spoke on a positive note even as the regime has been threatening to get rid of all South Korean facilities at the Mount Kumgang resort.

The public “could be feeling frustrated” these days with the ongoing stalemate in inter-Korean ties, Moon said. But if a third summit between North Korea and the United States takes place, he continued, there “definitely will be achievements,” which could lead to improvements in South-North relations. The Blue House chief said that in order for the inter-Korean railway project to resume, related equipment will have to enter the North, which requires an easing of international sanctions. But sanctions relief “relies heavily” on successful dialogue between Washington and Pyongyang, he noted.

In regards to prosecutorial reform, Moon once again apologized for causing “conflict” in the country by appointing Cho Kuk as justice minister, but said it was “fortunate” that the controversy highlighted the importance and urgency of prosecutorial reform.

Moon refused to accept criticism that his economic policies are failing, saying that South Korean society is economically polarized, which is why policies that help the economically vulnerable, like a raise in minimum wages, are “absolutely” needed. The president spoke optimistically about the implementation of the 52-hour workweek as well, saying it was “the path we have to take.”

Moon answered a total of 20 questions for 115 minutes on Tuesday, 15 minutes over the time he was originally planned to speak.

The first question went to the parents of nine-year-old Kim Min-sik, who died on Sept. 11 in front of his elementary school in Asan, South Chungcheong, in a car accident. The so-called Kim Min-sik bill was proposed to the National Assembly after the incident, requiring traffic lights and speed cameras in “school zone” areas 300 meters (984 feet) from school gates. It also calls for three-year jail sentences for drivers convicted of causing deadly crashes.

The bill is still pending. Moon vowed to cooperate with the National Assembly to pass the bill.

Opposition lawmakers made mostly negative comments about the event Wednesday, saying the president failed to say what the public really wanted to hear. The ruling Democratic Party, on the other hand, praised the president for “lowering” himself to candidly speak to the public.

Blue House spokesperson Ko Min-jung told a TBS radio show on Wednesday morning that she felt “sorry” that Moon had to go through an unscripted live show, saying she worried things might get out of control in the studio.

“But what was really heartwarming,” said Ko, “was when at the very end [of the program], everyone gave a standing ovation. I kind of thought the public was on a really high level.”