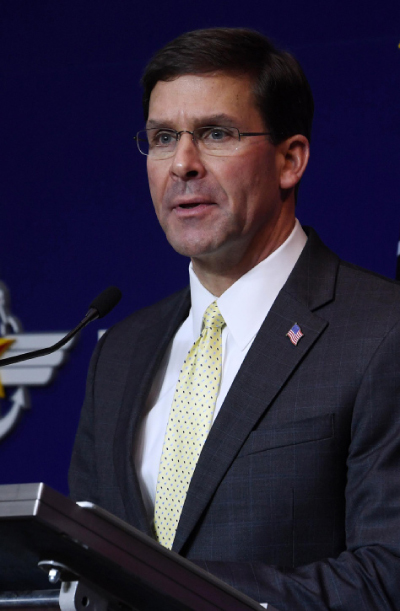 U.S. Defense Secretary Mark Esper on Tuesday dodged a question on whether Washington could consider withdrawing troops from South Korea if a defense cost-sharing agreement flops this year, hinting the two issues may be linked in the United States’ approach to the alliance.

“I’m not going to prognosticate or speculate on what we may or may not do,” Esper told reporters at a press conference in the Philippines when asked about the possibility of reducing U.S. troops in South Korea if no deal is reached in next year’s Special Measures Agreement (SMA).

“The State Department has the lead in these discussions, and I’m sure they are in capable hands. We just take this one step at a time.”

Esper echoed comments he made in Seoul last Friday in a joint press conference with South Korean Defense Minister Jeong Kyeong-doo, saying South Korea is a wealthy country that “can and should contribute more” to the cost of supporting 28,500 American troops on its soil.

Esper’s remarks came just a day after the Washington’s chief negotiator in cost-sharing talks, James DeHart, walked out on his South Korean counterpart in Seoul, saying the South Korean side was “not responsive to [the U.S.] request for fair and equitable burden sharing” by rejecting Washington’s demand for a contribution of $4.7 billion - five times what South Korea paid this year.

The Pentagon chief’s ambiguity regarding the U.S. Forces Korea stood in stark contrast to comments made en route to Seoul on Nov. 13, when he clearly told reporters that he was not considering the option of adjusting the U.S. troop presence on South Korean soil.

A joint communique put out by the two countries’ defense ministries at the conclusion of their annual security consultative meeting Friday also said Esper had “reaffirmed the commitment to maintain the current level of the U.S. military personnel” in South Korea.

While it remains unclear whether Esper’s aversion to the question Tuesday was anything more than that, his words suggested that the troops could be used as a negotiation card to press Seoul to foot a larger bill for their upkeep in the ongoing SMA negotiations.

“A South Korea-U.S. alliance based on shared values and mutual trust is slowly disintegrating, replaced by a relationship held together by money and tradeoffs,” said Kim Hong-kyun, a former special representative for Korean Peninsula peace and security affairs for Seoul’s Ministry of Foreign Affairs.

“The fact that the United States is using brinksmanship tactics on South Korea, when they should be reserved toward North Korea, is itself a shock and suggests that the Donald Trump administration could unleash a sort of ‘fire and fury’ toward South Korea if Seoul exits Gsomia.”

Gsomia, short for the General Security of Military Information Agreement, is an intelligence-sharing pact between South Korea and Japan that is set to expire at midnight Friday unless Seoul recants a decision announced in August to withdraw.

Washington has been putting heavy pressure on South Korea to stay in the pact, with Esper stressing at a trilateral defense ministers’ meeting with Jeong and Japanese Defense Minister Taro Kono in Bangkok on Sunday that the “only people to benefit from friction between Seoul and Tokyo are Pyongyang and Beijing.”

Yet Seoul shows few indications it will budge on either Gsomia or the cost-sharing negotiation. In a publicly broadcast town hall meeting Tuesday, President Moon Jae-in maintained the position that Japan is primarily responsible for the pact’s fate, and that Tokyo should review its decision to impose export controls on South Korea if it wants to keep the agreement.

On Wednesday, meanwhile, the floor leaders of the three largest parties in South Korea’s National Assembly departed for Washington as part of a multi-partisan mission to persuade the United States to reconsider its stance on cost sharing.

Over the course of five days, the lawmakers are expected to meet with their counterparts in both houses of the U.S. Congress to stress that the Trump administration’s demand for a hike in South Korea’s contribution is straining the two countries’ military alliance.