Honorary consuls to descend on the nation for congress

Honorary consuls to descend on the nation for congress 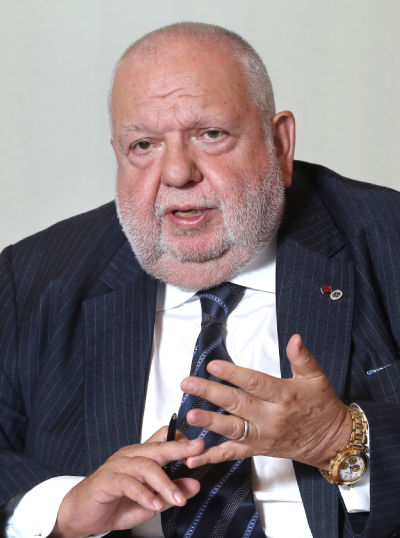 Aykut Eken, president of the World Federation of Consuls and honorary consul general of Turkey in Jamaica, speaks to a group of reporters during his visit to Seoul on Tuesday about the upcoming World Congress of Consuls to be hosted in Korea for the first time in 2021. [PARK SANG-MOON]

Korea remains an unknown land for hundreds of honorary consuls around the world according to the president of the World Federation of Consuls (Ficac) on his recent visit to Seoul. But that’s about to change with the nation set to play host to Ficac’s world congress for the first time in 2021.

“The finalists to host the next World Congress of Consuls in 2021 were Thailand and [South] Korea,” Aykut Eken, president of Ficac, one of the largest groups of honorary consuls in the world, told a group of reporters in Seoul Tuesday. “A lot of people have been to Bangkok for holidays and not too many have been to [South] Korea. They prefer to see a new country.”

But it’s not just South Korea’s mystique that has people interested.

“We heard about a project to put a train between South and North Korea,” Eken said. “Many of us would be interested to see for ourselves and experience the inter-Korean dynamics here. But it is just hope, not something that is scheduled yet for 2021.”

Ficac was established in 1982 by a group of consuls including Vagn Jespersen of Denmark and others from Finland, Greece, Iceland, Italy, Norway and Sweden. Today, it is a nongovernmental organization recognized by the United Nations with around 90 countries as members, including South Korea. The number of honorary consuls of these countries number at around 5,000 according to the organization.

The organization hosts a world congress every three years. The last meeting was held in Belgium and Korea’s Corps of Honorary Consuls will be working with Ficac to host the 13th World Congress of Consuls in October 2021. “In our general assembly we will be holding various discussions among consuls to share their experiences and also to enhance their understanding of Korea,” Eken said. “So one of the topics for our discussions may as well be about peace on the Korean Peninsula.”

Honorary consuls have the same function as career consuls - which include protecting the representative country and its citizens’ interests in the receiving country, facilitating commercial, economic, cultural and scientific relations between the two and assisting with visa and passport matters. The main difference between the two is that many of them are not paid for their services.

“The process of appointment is more or less the same, with the sending country sending credentials of the honorary consul and the receiving country approving them,” said Eken. “A lot of us have backgrounds in business. Most of us are not paid by the government for our services.”

Eken is an honorary consul general of Turkey in Jamaica. His career has largely been based on steel trade.

“The honorary consuls can use their networks and experiences to influence tourism ties between the two countries,” he said. “For instance, between Jamaica and Turkey, we are working to send more tourists from Jamaica to Turkey, to promote the Blue Mountain coffee from Jamaica in Turkey and in assisting more Turkish people to work in the tourism sector in Jamaica.”

Ficac hopes to use the networks of honorary consuls to influence decisions within each nation, especially regarding the environment, human rights, health and education.

“We are working to assist the nations to reach the 17 Sustainable Development Goals of the UN,” Eken said. “That includes our work to reduce poverty and hunger throughout the world, helping more people gain access to health care and better environment and education. We have a committee designated for promoting gender equality, especially for women in the world of diplomacy. We are also working for clean water and sanitation.”

Eken emphasized, however, that their work stays away from politics.

Eken, who has been president of Ficac since 2015, was visiting Seoul this week to meet with officials in the Ministry of Foreign Affairs and Seoul Metropolitan Government.

“We shared our plans for the congress with the officials and checked the possible venues in the city,” said Eken, whose first visit to Seoul dates back to 1986, when he came on a business trip. “Korea has such vibrant cities. I know Busan will also be an interesting destination for many visitors.”

In Korea, there are 132 honorary consuls who have been accredited by 102 countries, according to the Corps of Honorary Consuls in Korea. The group is headed by Yang In-mo, former president and CEO of Samsung Engineering, with experience in Germany and Croatia among other countries. He has been an honorary consul in Croatia since 2007.