Giants finally find a player who can catch

Giants finally find a player who can catch

The Lotte Giants have finally found a catcher. 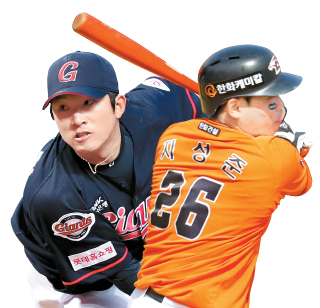 When the Giants finished dead last in the 2019 regular season standing, they were in desperate need of a catcher. After they lost Kang Min-ho to the Samsung Lions in 2017, the club has shown serious weakness behind the plate. When the free agent negotiation period officially began on Nov. 4, it seemed highly likely that the Giants were going to sign one of the two catchers on the market - Lee Ji-young and Kim Tae-gun.

However, when Lee Ji-young signed a contract with the Kiwoom Heroes on Nov. 13, the Giants announced that they will not be signing a free agent catcher. Then, despite having the first pick in the second round draft, the Giants once again made a surprise decision by drafting an outfielder instead of a catcher.

After failing to pick up catchers in the free agent market and in the second round draft, they’ve finally found one through a trade on Thursday with the Hanwha Eagles.

The bottom-ranked club made a two-on-two trade, with pitcher Jang Si-hwan and catcher Kim Hyun-woo going to the Eagles in exchange for catcher Ji Seong-jun and infielder Kim Joo-hyun.

Although Ji is not as experienced as Lee, he is still considered a great catch for the Giants. Ji made his KBO debut with the Eagles in the 2015 season, and it wasn’t until the 2018 season that Ji was given more playing time. In 2018, he played in 99 games and had an impressive 0.275 batting average with seven home runs and 29 RBIs, helping the Eagles to finish third in the regular season standing.

Throughout the 2019 season, Ji played as a backup catcher for the Eagles. He’s only played in 58 games and finished the season with a 0.250 batting average, two home runs and 11 RBIs.

Since he is younger than the catchers in the free agent market and the second round draft, the Giants are expected to be able to use Ji for a longer period.

But to get Ji, the Giants had to suffer a loss in their starting rotation. In return, the Eagles took Jang, who played as a Giants’ starter throughout the 2019 season. Jang made his KBO debut with the Hyundai Unicorns in 2007. In 2015, he was traded to the KT Wiz and after two seasons with the Wiz, Jang joined the Giants in 2017.

Having mostly played as a bullpen pitcher until the 2018 season, Jang switched his position to a starter this year and picked up six wins and 13 losses with a 4.95 ERA. Although he didn’t pick up as many wins, throughout Jang’s 27 starts this season, he had nine quality starts and pitched in 125 and one-third of an inning.

Although the Giants lost a starter, the club is expected to fulfill his absence with pitcher Noh Kyung-eun. Noh signed a two-year contract with the Giants at 1.1 billion won ($935,000). As Noh missed the entire 2019 season after failing to sign his free agent contract with the club last year, he is currently playing for Geelong-Korea in the Australian Baseball League to prepare for the 2020 season.

Along with Jang, the Giants also gave Kim Hyun-woo to the Eagles. Kim is a 19-year-old catcher who hasn’t made his KBO debut yet. In the Futures League this season, Kim played in 13 games and had a 0.250 batting average with one home run and six RBIs.

In return, the Eagles gave away infielder Kim Joo-hyun. Kim is a first baseman and made his KBO debut with the Eagles in 2016. During his rookie season he played in four games, but in 2017, Kim played in 24 games with the Eagles and had a 0.265 batting average with nine hits and three RBIs. Once the 2017 season ended, Kim joined the Police Baseball Team to fulfill his mandatory military service.

With the addition of Kim, the Giants are expected to fulfill their weakness at first base.

The Giants are speeding up in their process of signing new foreign players, as they are reported to be in negotiations with infielder Dixon Machado and pitcher Adrian Sampson on Thursday.

In addition to the Giants and the Eagles’ big trade, the SK Wyverns and the Wiz also had a one-on-one trade. The Wyverns traded catcher Hur Do-hwan with Wiz infielder Yoon Suk-min.