Field hockey in Korea may not be the best in the world, but until the early 2000s, the national teams were at least considered the best in Asia. Those days are long gone. 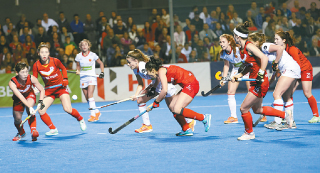 Back at the 1988 Seoul Olympics, the Korean women’s field hockey team defeated West Germany, Canada and England to advance to the gold medal game. The team ultimately lost 0-2 to Australia and walked away with silver. During the 1996 Olympics in Atlanta, the women’s team once again surprised the world by taking silver.

Continuing that success, the men’s team suddenly took off at the 2000 Olympics in Sydney, defeating Pakistan, the three-time Olympic gold medalist at the time, in the semis to advance to the finals. The gold medal game against the Netherlands was intense, with Korea going down 1-3 but coming back to tie the game. Despite a good fight, Korea had to settle for silver as they lost on penalties.

The record gets better at the Asian Games. Since 1986, the Korean men and women’s teams have won a total of nine gold medals.

But neither team has a shot at returning to their former glory at the 2020 Tokyo Olympics, as they’ve both failed to qualify.

During the women’s final qualifier last month, the 11th ranked Korea lost to No. 7 Spain 1-4. With a loss, the Korean women’s team failed to earn a spot at the Olympics for the ninth consecutive time. Their streak ended at eight, from 1988 to the 2016 Games.

As the men’s team, ranked 16th in the world, lost their qualifier to New Zealand 2-6 earlier this month, they also failed to advance to the Olympics for the second straight time.

A total of 12 countries qualify for the Games, and both Korean teams are ranked highly enough to theoretically be in with a serious shot. Each of the continental champions from five different federations is automatically given a spot, as well as Japan, the host. The remaining six countries are determined at the Olympic qualifiers.

But the final whistle hasn’t blown for the women’s team just yet.

There are rumors that South Africa, the winner of the 2019 African Olympic qualifier, is uncertain about its participation.

Hockey-loving South Africa has very high standards for flag-carrying hockey teams. Although the team has qualified through the regional qualifier, the South African Sports Confederation and Olympic Committee has other standards to judge whether it thinks a team is competitive enough to compete at the Games.

If South Africa were to pull out of the Olympics, the Korean women’s team could get another shot at earning a spot.

As of now, neither the men’s or women’s team is competing in Tokyo next year. This is the first time in 36 years, since the 1984 Summer Games in Los Angeles, that both teams will not compete at the Olympics.

Before the Games, the Korean men’s and women’s teams both failed to medal at the 2018 Asian Games for the first time in 40 years.

“Korea finished third in the first round of the Olympic qualifier,” said Shin Seok-kyo, the head coach of the men’s team. “But once we played against New Zealand in the final qualifier, they were a completely different team. I think they’ve gotten stronger by competing against top-ranked teams in the International Hockey Federation (FIH) Pro League.”

The FIH Pro League is an international field hockey tournament held from January to June every year. About eight to nine countries compete in the event. This year, both the Korean men’s and women’s teams did not participate in the event. Making matters worse, they also decided not to compete at the pre-Olympic tournament in August.

Over the years, Korea has received invitations from international tournaments but has been hesitant to compete. Due to this, there have been rumors that the Korea Hockey Association (KHA) is struggling financially.

“Financial issues are not the reason for us to not compete at the pre-Olympic tournament,” said the KHA President Kang Dong-hoon. “We already had our year-long plan set out [by the time we were invited]. Ahead of the final Olympic qualifier, the men’s team trained in the Netherlands and the women’s team trained in Ireland. I hope we can get more support from the Ministry of Culture, Sports and Tourism.”

Currently, the Korean men’s and women’s team lack staff members. Each team has only two coaches, including the head coach. Korea doesn’t even have a coach that specifically coaches goalkeepers. Looking at the top ranked teams in European countries, they tend to have about eight to 10 coaches on staff.

Korea also doesn’t have a league system to develop players. Currently, the country has five men’s and six women’s teams. There are a total of 1,250 amateurs and only 220 pros registered with the KHA.

“In New Zealand, they have over 45,000 players registered in their league,” said KHA Secretary General Park Shin-heum. “Looking at us, the number has halved from 1990, when we had about 3,500. Not only hockey, but other Olympic sports are having a hard time at the Olympic qualifiers.”