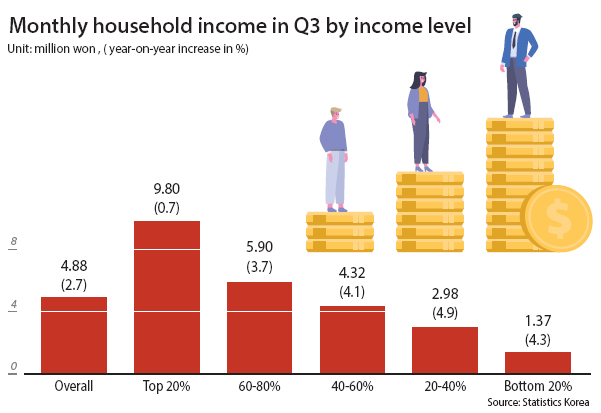 President Moon Jae-in’s economic policies are working, according to the Blue House Thursday.

Household incomes for people in the lowest 20-percent income bracket increased in the third quarter, the administration said, adding that this argues in favor of maintaining the current polices.

The comments came the same day as supporting statistics were released by Statistics Korea. According to the agency, overall household income grew 2.7 percent in the third quarter compared to the same period a year earlier, to 4.87 million won ($4,150).

Income of households in the lowest 20-percent bracket grew at a faster pace than in the second quarter, up 4.3 percent to 1.37 million won.

Despite the Moon administration’s income-led growth policies, which include sharp increases in the minimum wage over the past two years, household incomes of the lowest bracket had been falling until the first quarter.

“The shrinking income of the lower-income households was the biggest problem with the household income trend,” President Moon said, according to the Blue House. “However, since positive signs were seen in the second quarter, household income and distribution [of wealth] have improved further in the third quarter.”

The income gap between the top 20 percent and the bottom 20 percent narrowed compared to a year ago, as incomes grew faster for lower-income individuals.

“In the case of the lower-income households, their incomes have increased due to enhanced government support of income as well as the improvement in job markets and because the drop in labor income has slowed down,” noted Park Sang-young, Statistics Korea’s director of short-term household income and expenditure. “The income gap improved as the top income households’ income did not increase as much as those of the lower income households.”

“The effect of the government’s consistent income-led growth and inclusive-growth policies is finally showing up as of the third quarter,” Hong posted. “The improvement in income distribution shows the recent employment recovery and government policies doing relatively well.”

The finance minister added that the recent result is a meaningful achievement in light of challenges related to increases in the elderly population and households with family members that are jobless.

Worries about the falling incomes of small self-employed businesses remain as the economy remains weak.

The study has found that labor income compared to a year ago grew 4.8 percent to 3.36 million won. But income earned from personal businesses fell 4.9 percent to 880,000 won.

“Income made from private businesses suffered the sharpest decline since related data was first compiled in 2003 as overall domestic economic conditions became difficult, including consumer spending slowing down and low construction and facility investments,” said Park, the director at Statistics Korea.

Doubts have been raised about the increase in income in the lowest income category as government support has increased considerably.

Labor income fell for those in the lowest bracket, falling 6.5 percent to 447,000 won, indicating that these families are heavily reliant on the government support.