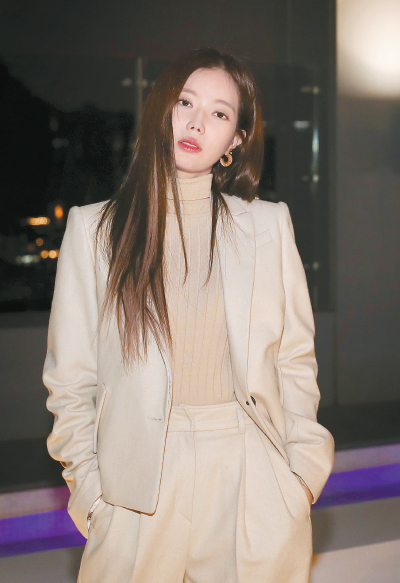 Actor Im Soo-hyang rewrote history for cable channel MBN, but it was a new chapter for her career, too.

Im’s recently wrapped up MBN-Dramax series “Graceful Family” finished with an 8 percent viewership rating for its last episode on Oct. 17 - a number never reached by any program on the channel. It was a major transition from her last hit, JTBC’s “My ID is Gangnam Beauty,” in which she played a timid college student with a low self-esteem maturing through unfair situations that she had to go through because of her looks. With “Graceful Family,” however, Im was nothing but a straightforward, candid millionaire who brought a sense of catharsis to viewers.

“I didn’t know that it would be seen so much,” Im said, when asked about her recent drama.

Born in 1990, Im made her debut in 2009 with a small role in the film “4th Period Mystery” and gradually made her way up the ladder with bigger roles. “Gangnam Beauty” shot her to stardom after she found just the right character for her. The introverted Mi-rae who grows little by little from her first day of university was like seeing Im bloom into the actor she is. Her latest character, Mo Seok-hee, may not have been the easiest for her to play, but she came alive through a lot of effort.

Ilgan Sports, an affiliate of the Korea JoongAng Daily, sat down with Im to talk about the success of her drama and her blooming career as an actor. The following are edited excerpts.

Q. It must feel so good to have achieved a record with “Graceful Family.” Tell us, how do you feel?

A. I really didn’t expect it to do so well. I’m just so grateful for the love we got. We thought that it would be a success if we got 3 percent [ratings] and a massive hit if we had 4 percent. MBN hasn’t had that high of ratings for its dramas before. But I guess word of mouth spread and it happened.

How do you feel now that it’s over?

I actually can’t really take in the fact that it’s over, because I used up so much energy for this and I was almost just flat out of power. I felt the need to rest. I put in a lot of mental energy because I wanted to pull it off well, and it’s gotten me wanting to take a break. But I’m actually not the kind of person who takes breaks. I like working, and so this feeling probably won’t last that long.

“Graceful Family” had a lot of twists in each episode. Did you feel that too?

I felt there was always a moment of catharsis at the end [of an episode]. And the character was just really charming from the very beginning. She’s a millionaire, but also with some cute sides that I think the viewers got to like. I was worried a lot, but I’m thankful for how everything turned out.

It was really interesting to see such a different character from “Gangnam Beauty.” How did you feel about the difference?

“Graceful Family” really was different from “Gangnam Beauty.” I think [with “Graceful Family”] I saw a female protagonist like none other. It made it novel, and it made the whole drama feel like you’ve seen it somewhere you actually haven’t. She felt familiar, but uncanny - and that was the appeal of the work.

How did you cope with the difficulties you faced during filming?

Mostly the good reactions from viewers, and the supportive comments on the internet - those things are what gets us actors going. It’s really rewarding to see good compliments after working hard and seeing it pay off. But honestly, I didn’t really get to take all that feeling inside. There were just too many things to care about from head to toe, and the role was just quite demanding. The journey was challenging, but it’s definitely fulfilling.

So does that mean “Graceful Family” is your new No. 1 work?

I think No. 1 works will keep coming (laughs). I think “Gangnam Beauty” was a turning point for me. But I’m not so sure about No. 1 work, though. From a very personal point of view, I only see the things I could have done better.

But it does seem like you take on the jobs that are quite challenging. Is that so?

It is. Like when I was doing MBC’s “Windy Mi-poong” I was cast by an emergency call, then with KBS’s “Lovers in Bloom” I tried a daily drama. Then with “Gangnam Beauty,” I took on the role of a woman who became beautiful through plastic surgery. Some of the roles that were quite demanding and were obviously left untouched by others turned out to be the right ones for me. If I had drawn a line for myself saying I couldn’t, then I wouldn’t have done all these great characters. I would have missed the opportunities. I was afraid, but I think it’s right to do it if the character, the work and the script is good - and as long as you have people who trust you. Thinking about it in a simpler light broadened the spectrum of my work.

I like to take risks and make something out of it. Of course, “Gangnam Beauty” had a very clear message. And like that, there has to be a clear motivation for me, because that makes it worth the risk.

I don’t really look back at the past, but it did feel touching to be congratulated by the fans. There aren’t a lot of colleagues from the theater department [at Chung-Ang University] who are still acting, and I’m one of them. I think I’m fortunate to still be doing something in such a competitive entertainment field. It made me feel that I shouldn’t lose my goals. I keep reminding myself of how desperate I was, when I took the train from my hometown to Seoul every weekend to study. I would stay up all night then take the first train back home.

When did you first start studying in Seoul?

I started going back and forth from Seoul and Busan when I was in middle school. I went to Anyang Arts High School and I moved to the capital region. I lived with my older brother.

So you’ve practically lived your life for acting?

I have never dreamt of anything else. There were times when I thought I wanted to quit because it was so hard, but nothing ever really made me as happy as I was while acting. I think I have a happy job. If you look around you, there isn’t anything that’s easily done. We all struggle, but it’s up to you to enjoy the happy moments within. I feel happy when I’m acting, and I’m grateful for that.

Do you look at the comments people write about you online?

I do look at the comments and the reactions I get. I look at it because I want to know, but I don’t want my family or friends seeing them. I actually shout at them if they do. I don’t think anyone’s safe from hateful comments. You can’t cater to everyone’s needs, and everyone has different tastes. The reason I read them is because the good things give me energy, and there are some meaningful assessments as well.

What’s the biggest thought on your mind these days?

How will I heal myself and get myself back on my feet again? Being in the entertainment industry, so many things happen and it’s crucial that you keep your mind on the right track. But it’s also a repetition of delving into a character, then breaking up with them again and again. I’m doing this job because I fulfilled my goal and I’m happy doing it. So I want to keep doing it well and keep my mind focused.

I do try to take in the criticisms, but it does hurt. But if in the past I was hurt by the one bad comment out of 10, nowadays I’m starting to look at the nine good comments.

How do you picture your 30s to turn out?

I want to live my 30s like a teenager - someone who is responsible, but also has the emotional room to laugh at leaves passing on the street. I used to think that being mature quickly was a good thing. But looking back, it wasn’t just all good. I was a student who had a lot of worries, but now I want to live my 30s full of energy.