GS E&C has its own AI platform for apartments

GS E&C has its own AI platform for apartments 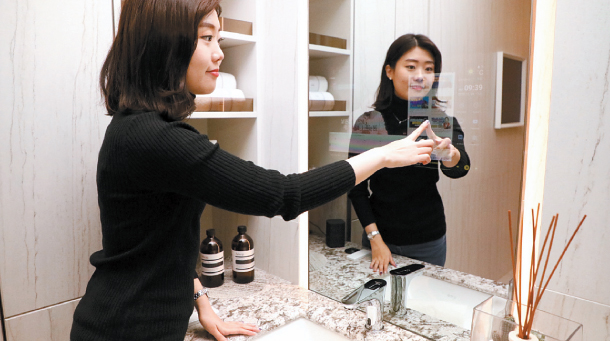 A mirror pad installed on a bathroom mirror of a Xi apartment enables residents to watch YouTube videos or shop online. [GS E&C]

GS Engineering and Construction (GS E&C) said it has developed an artificial intelligence (AI) platform to be used in the apartments it builds.

Jointly developed by its subsidiary Xi S&D, the platform offers an AI home system that is able to connect with the voice assistants of the three mobile carriers - SK Telecom, KT and LG U+ - as well as Kakao, Naver’s Clova and Amazon’s Alexa.

In apartments, the system collects data to offer convenient functions to residents, according to GS E&C.

Based on the big data, appliances like refrigerators, air purifiers and washing machines can be automatically controlled through Internet of Things (IoT).

“We concluded there could be risks to that in the future and decided to develop our own platform. While strengthening security, we invested long term to create an AI platform based on big data.

“We believe the platform, when improved, could function as a stepping stone [for us] to provide better services in the homes.”

It took two years to develop the platform.

The data is stored on Amazon Web Services, and all the personal data is erased when residents move out, according to GS E&C.

The company said the platform will increase security and safety of apartment complexes, even against data hacking. The platform is embedded with cyber and physical security systems.

All the telecommunications inside the apartment complex are encrypted, and only those devices that have been identified by Xi are permitted to access the system, according to GS E&C. Physical security includes facial recognition lobby phones that can be connected through the Xi smartphone app.

“Our goal through the establishment of an AI platform is to apply the system to 100,000 households by 2021,” Woo said.