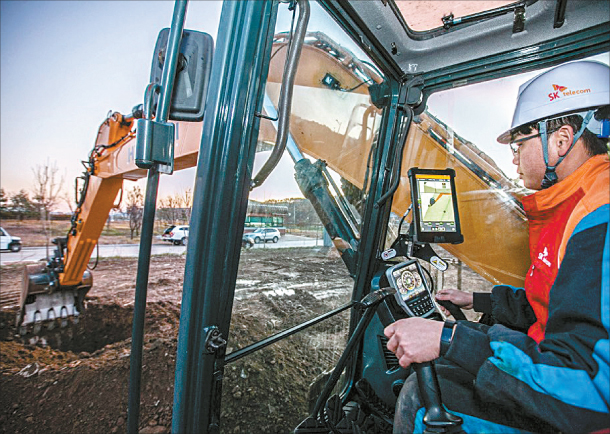 A construction worker controls an excavator that digs based on measurements obtained by sensors at a research center in Yeoncheon County, Gyeonggi, last month. [SK TELECOM]

Construction sites may not be your typical idea of a high-tech workplace. Mobile carrier SK Telecom claims otherwise - the company announced Thursday it has cut costs and time for construction by 25 percent with connected equipment and drones.

The goal was to build a 260-meter-long (853-foot-long), 20-meter-wide road. The test compared the efficiency of traditional construction methods and those using telecommunications technology. The Korea Institute of Civil Engineering and Building Technology (KICT), Hyundai Construction Equipment, SK Engineering and Construction and California-based Trimble also took part in the experiment.

High-tech methods including sensors, drones, 3-D modeling and augmented reality (AR) technology were used throughout the construction process, from taking measurements, planning and building to managing the road.

The adoption of high-tech equipment in construction isn’t new, but this test was the first time they were applied to such a wide range of procedures, SK said.

“The test run is meaningful because it’s not just a blueprint of what could happen - it showed real-life figures on the effect different technologies can have when used in specific procedures,” a company spokesman said.

For example, when taking measurements of land or amount of dirt, a drone flew above the ground, drawing a map using radar. The same job would have taken five people 18 days to complete. In the experiment, it was done by one drone and three people.

During the actual construction, sensor-attached equipment was used including an excavator that calculated where and how deep it should dig based on GPS information and measurements obtained by sensors.

The test run was conducted on SK Telecom’s 4G LTE network, but the mobile carrier said the experiment shows how much potential a faster 5G network could have on a construction site.