Choosing ‘death’ rather than becoming a ‘sinner of history’

Choosing ‘death’ rather than becoming a ‘sinner of history’ 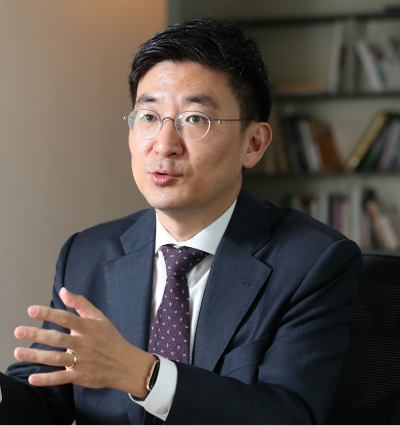 “I have insomnia. It’s been a month. This is the same symptom I suffered in 2016 when former President Park Geun-hye faced impeachment. I can sleep for no more than four hours,” answered Rep. Kim Se-yeon, a three-term lawmaker of the main opposition Liberty Korea Party (LKP), to the first question of the interview, “Did you sleep well?”

It’s not difficult to guess why Kim has been tossing and turning. Deciding not to run in next year’s general election was undoubtedly a long and agonizing process.

“The party didn’t change though I tried,” he said.

“I decided not to run because if it goes on like this, I thought I would become a ‘sinner of history.’ I don’t want to blame nor criticize anyone. As our abilities fall short to address the current situation, I choose to die with dignity,” added Kim.
“We didn’t choose to die to survive. We chose to die so that the nation can live,” emphasized the lawmaker.

When asked, “If there was a major reason for not running, what would it be?” Kim replied, “When I give loyal advice, it is dismissed as venting or is distorted into a bid to challenge the leadership. To raise awareness on how serious the situation is, I decided not to run.”

The JoongAng Ilbo conducted an interview with Rep. Kim Se-yeon at a conference room on the 7th floor of the company building on Monday. Below are edited excerpts of the interview.

Q. How do you feel right now?

A. Not so different from usual. I always had this feeling of dissatisfaction, or frustration about politics. So I am pretty much composed.

How are others around you reacting?

There was more encouragement than I expected, so I was surprised. Also, the backlash wasn’t as serious as I anticipated.

Was there anything impressive?

I received many long letters. Long letters mean something to me because they require condensed thoughts and effort.

What made you decide to not run?

Actually, these sorts of thoughts have been accumulating in my mind for a long time ever since I started politics. When I announced my decision in my written statement, I confessed to my hate of politics. If I had to choose what made up my mind, I would pick the events I had to go through last week. On Nov. 12, six heads of district chapters of the LKP below 50 years old stepped down, calling for “the dismantlement of the party.” Other unelected chapters who had a slight hope of becoming elected through public recommendation of the party, relinquished that small privilege.

A while ago, the LKP’s task force for organizing a campaign for the next parliamentary election held a seminar to reflect the voices of voters in their 20s and 30s. At the seminar, one audience member hit the nail on the head.

“Just because you listen to the younger generation to fix problems, it won’t change anything. As long as you guys on the task force are in charge, problems won’t be fixed. Stop talking about change. Step aside and let young people take your place.”

[Recently, the ruling party and the main opposition party each launched a task force for parliamentary election. The Democratic Party’s (DP) task force has five female members and four of the 15 in total are under the age of thirty, while the LKP has only one woman and no members in the 30-or-below age group.]

Also, when Rep. Kim Sung-chan publicly announced he will not run in the next election, I starting looking for the right timing [to announce my decision.]

In the written statement, you said the LKP’s “very existence is a nuisance,” and “a zombie political party,” which were more aggressive than your usual comments.

It was my judgement that they won’t get the message unless I speak with such intensity. I delivered the essence of my perspective and diagnosis.

[The LKP] is perhaps the most dislikable political party ever. How is it inside the party?

It’s not like each and every one of the party members is [dislikable], but they have somewhat failed to escape the trap of group thinking. There is another problem with the lack of diversity of the members. Because of the problematic public recommendation system, diversity of members is at rock bottom.

As the head of the Yeouido Institute, I wanted to create topics that can resonate with people in their 20s and 30s. I have called for [the LKP] to understand them rather than reject them as wrong because of differences in opinion. But such a call can’t echo or make waves in the LKP’S current system. It only creates a backlash. I realized over time that “there is a discrepancy I’ll never be able to overcome.”

What is your opinion on Chairman Hwang Kyo-ahn’s leadership?

He is a great man. It’s difficult to demonstrate strength and warmth at the same time. But I find his lack of previous exposure to the political environment and insufficient opportunities to do so quite unfortunate as he has to take the reins of the main opposition party especially at a time when the nation is facing crisis.

Chairman Hwang virtually rejected the call for the “resignation of the whole leadership.”

I expressed my thoughts yesterday, and it’s up to each of them to decide.

Compared to Bareunmirae Party leader Rep. Yoo Seong-min’s three principles of “overcoming [the aftermath] of impeachment, marching forward as innovative conservatives and tearing down the old house to build a new one,” how are your [principles] different?

There is opposition inside the party that “It’s ludicrous to dismantle the party ahead of a parliamentary election.”

That only proves how we see things differently.

What does your announcement portray more of, disappointment of or expectations for the party?

I called for the dismantlement because I didn’t have any expectations. All I’m saying is that the LKP should make way for a new conservative party to form in the future, not that all conservative parties should disappear.

Im Jong-seok, President Moon Jae-in’s former chief of staff, announced that he would not run in the election. What is your take on the ruling party’s moves preparing for the parliamentary election?

One of the reasons I lost expectations about the LKP is because the DP took the swift measures that the LKP should be taking. When the LKP failed to show such perspective or action, I thought it couldn’t go on anymore.

What do you mean exactly?

For starters, DP lawmakers Rhee Cheol-hee and Pyo Chang-won said they will not seek reelection and the members of the party’s task force for parliamentary election are quite different from the LKP’s. Also, they removed uncertainties by setting the ground rules for public recommendation from the beginning.

Are you going to retire from politics after the elections?

Last year I had a chance to study the spirit of admiral Yi Sun-sin, who said “Be thorough when preparing for work, give everything during work and don’t look back after finishing work.” My goal is to deal with the challenge lying in front of me, and thinking about what I should do next will only invite unnecessary personal matters, which would get in the way of doing my work. I don’t think about what I should do next.

Do you think your announcement will signal the start of the LKP’s reshuffle?

Each person has a big decision to make, so it’s inappropriate to force or push them. I’m calling for [the reshuffle] not to pressure my fellow lawmakers, but to urge self-reflection and reconsideration. It’s merely a suggestion, and no one knows how it’s going to turn out. But I did it anyway because someone had to speak up to get things started.