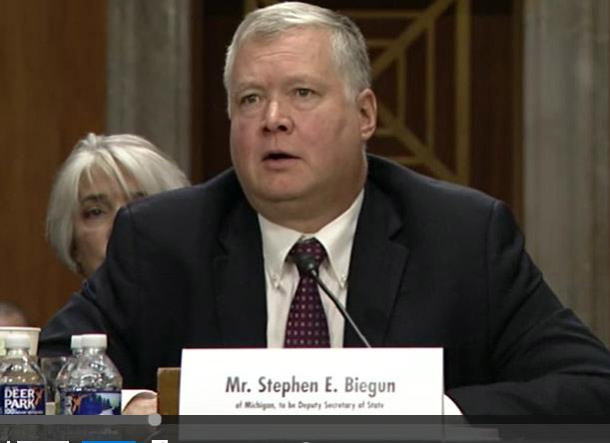 Washington’s top nuclear envoy and nominee for deputy secretary of state, Stephen Biegun, said in a U.S. Senate confirmation hearing Wednesday that Korea was one of the most important allies of the United States but this doesn’t mean it can “free ride” on American defense commitments.

His comment dovetailed with U.S. President Donald Trump’s longstanding claim that Korea, as well as other key U.S. allies like Japan and the member states of NATO, is a “major abuser” of Washington’s military protection.

Trump’s transactional approach to the U.S. alliance with Korea was demonstrated in his demand for a reported $4.7 billion from Korea as part of next year’s Special Measures Agreement (SMA), which produced heavy pushback from Seoul in cost-sharing negotiations that Biegun characterized as “tough” in his hearing on Wednesday.

“Countries like South Korea, with which the United States has longstanding shared interests and values, are alliance partners who are the foundation of American influence in various parts of the world,” Biegun said, according to Reuters. “But, it also requires those countries to take fully seriously their responsibilities in the alliance as well.”

Cost-sharing negotiations that took place in Seoul on Tuesday broke down in just over an hour after the U.S. delegation stormed out over what Washington’s chief negotiator James DeHart said was the Koreans not being “responsive to [the U.S.] request for fair and equitable burden sharing.”

The demand for $4.7 billion is five times the amount Seoul paid this year, which amounted to nearly 1.04 trillion won ($888 million) in accordance with the 10th SMA, which expires this December.

The collapse of this week’s talks testified to a growing rift between the allies over the upkeep of the 28,500-strong U.S. Forces Korea (USFK) and Seoul’s threat to withdraw from an intelligence-sharing pact with Japan, known as the General Security of Military Information Agreement or Gsomia.

On a trip to Seoul last Friday, U.S. Defense Secretary Mark Esper stressed Korea is a wealthy country that “can and should contribute more” to supporting U.S. troops on its soil and during a press conference in the Philippines on Tuesday suggestively dodged a question on whether the withdrawal of troops or a scaling down could be options Washington might take.

“I’m not going to prognosticate or speculate on what we may or may not do,” Esper said.

Citing a source in Washington “familiar with the negotiations” in an exclusive report on Thursday, the Korean conservative daily Chosun Ilbo claimed the United States was considering pulling one brigade - a contingent ranging from around 3,000 to 4,000 troops - from the USFK as a means to compel Seoul into acquiescing to Trump’s demand. Given that Washington’s National Defense Authorization Act for 2019 forbids reducing the size of the USFK to below 22,000 troops, the reduction of a single brigade could be a viable option, the report said.

Officials in both Korea and the United States however, denied there were any plans to adjust the size of the USFK under the present circumstances.

Korean Defense Ministry spokesman Roh Jae-cheon on Thursday said the Chosun Ilbo report was not the U.S. government’s official position on the matter, stressing Secretary Esper had reaffirmed the commitment to “maintain the current level of U.S. military personnel” during a bilateral security consultative meeting in Seoul last Friday.

Cory Gardner, chairman of the U.S. Senate Foreign Relations Subcommittee on East Asia, the Pacific, and International Cybersecurity Policy, told the JoongAng Ilbo in Washington on Wednesday that the Trump administration had no plans to link the USFK with the cost-sharing issue, stressing that Trump is aware of the immense value of U.S. troop presence in Korea.

“There is a significant value of having U.S. presence in Korea and the president knows that,” Gardner said.

“I’ve talked to that president about the importance of maintaining that level and increasing our cooperation.” On the cost-sharing negotiations, Gardner said finding an agreement was “critically important for [the Korea-U.S.] relationship” and that he looked forward to a resolution “that is mutually beneficial to all [U.S.] allies.”

Gardner, a Republican who has openly disagreed with many of Trump’s foreign policy positions, also met with the floor leaders of three of Korea’s largest parties in the National Assembly, who visited Washington starting Monday on a mission to persuade U.S. lawmakers to reconsider Washington’s hardball stance in the cost-sharing negotiations.

According to the Korean lawmakers, Gardner told them Trump’s demand for $4.7 billion was mainly a bluff from the U.S. president stemming from his ability to attract press attention. “In the end, [the cost-sharing matter] will be decided on a rational level,” Gardner told the lawmakers.