Bestowed with an honor

Bestowed with an honor 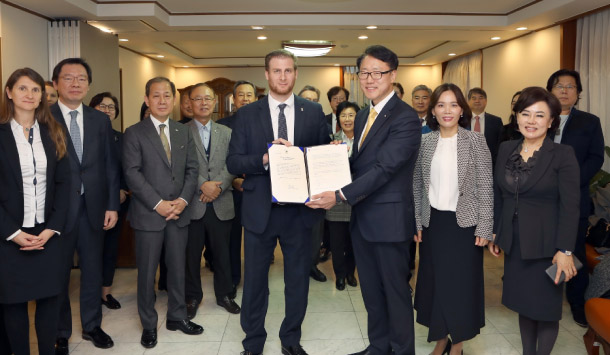 Hungarian Ambassador to Korea Mozes Csoma, left, presents an exequatur appointing Ryu Kwon-ha, the CEO of the Korea JoongAng Daily, as honorary consul of Hungary with jurisdiction over the cities of Andong and Yeongju and the districts of Bonghwa, Cheongsong, Uiseong, Yecheon and Yeongyang in North Gyeongsang on Thursday. Ryu signed documents from both countries’ foreign ministries in a ceremony at the embassy in Yongsan District, central Seoul, attended by members of the diplomatic corps, academia and business sector, and became the fourth South Korean honorary consul of Hungary. The two countries mark 30 years of bilateral ties this year. [PARK SANG-MOON]