Eighteen years after his KBO debut, pitcher Ko Hyo-jun has finally earned his free agent status for the first time. 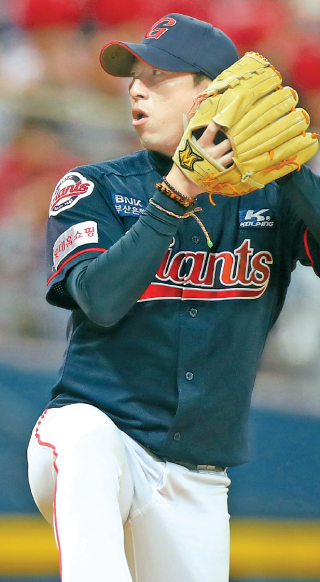 Pitcher Ko Hyo-jun throws a pitch during a Lotte Giants’ game against the Kiwoom Heroes at Gocheok Sky Dome in western Seoul on May 19. [YONHAP]

In the KBO, high school graduates earn their free agent status after playing nine seasons and college graduates earn it after eight seasons. A player must be on the 40-man roster at a KBO club for more than 145 days of a season for that to count as one of their years.

Due to this, a player can earn their eligibility in their late-20s at the earliest, assuming they play full time from their rookie season. Some players earn their status even earlier if they appear for the national team, as playing for Korea normally comes with a reward in the form of a deduction in the number of days until free agent eligibility.

At the same time, it could also mean that a player never earns free agency.

Since the free agent policy was first introduced in the KBO in 1998, Ko took the longest time to earn his free agent status. After graduating from Sekwang High School, Ko made his KBO debut with the Lotte Giants in 2002. But his career with the Giants ended earlier than expected as he was released right after that season.

He then joined the SK Wyverns and re-appeared in the KBO in 2004. Once the 2011 season ended, Ko underwent elbow surgery and fulfilled his military service. After the 2015 season, Ko was traded to the Kia Tigers, playing two seasons with them.

But this season, he’s made a comeback. Ko picked up two wins, seven losses and 15 holds with a 4.76 ERA. By playing in 75 games for the Giants this season, he finally earned his free agent status.

“It’s been really tough,” Ko said. “A lot of my friends retired and became coaches. But I’m glad to be continuing my playing career and I am confident that I can do more.”

Although 36 years is old for a free agent, this season, Ko proved that he is still competitive enough. Of the relief pitchers, he appeared in the most number of games at 75, and his 15 holds were his career high. Looking at his stats, Ko showed strength against left handed batters as he had a hit-against batting average of 0.242. Since the Giants lack left-handed pitchers, Ko’s skills proved crucial.

“Before the start of the season, I prepared thinking that I’ll play in about 70 games, maximum,” Ko said. “I was surprised because I pitched more [innings] than I expected. Our coaching staff gave me advice, telling me to give away home runs instead of walks. Thanks to their advice, I got to increase my number in strikeouts and lower the number of walks.”

Back when Ko was in his 20s, he was able to throw fastballs well above 140 kilometers (87 miles) per hour. However, due to his unstable control, the fans nicknamed him “rollercoaster.” As he got older, Ko started to lose speed in his pitches, but surprisingly, this year, it went up again.

According to statiz.com, a baseball statistic website, Ko’s average speed was 144.1 kilometers per hour this year, a full kilometer faster than in 2018.

As he finished his 2019 season successfully, Ko didn’t hesitate to apply for free agency. Although earning free agency means that he can sign with other clubs, Ko hopes to continue playing for the Giants.

“We finished dead last [in 2019],” Ko said. “I feel very sorry to the fans and manager Yang Sang-moon, who resigned during the season. Our team has transformed into a new team. I want to serve the role that our team wants me to. I’m confident that I can throw strong pitches for the next two to three years.”

While the Giants haven’t announced anything regarding the signing of Ko yet, they did announce the signing of two new foreign players for the 2020 season on Friday.

Sampson signed a one-year contract at $839,700 - $339,700 in signing bonus and $500,000 in guaranteed annual salary. After making his major league debut with the Seattle Mariners in 2016, Sampson joined the Rangers off waivers. Playing in the Rangers’ starting rotation and bullpen, Sampson picked up six wins and eight losses with a 5.89 ERA in 35 games.

This season, Machado signed a minor league contract with the Chicago Cubs and mostly played for its Triple A affiliate, the Iowa Cubs. Machado played in 102 games for the Iowa Cubs and had a 0.261 batting average with 17 home runs and 65 RBIs.

With the addition of Machado, who plays as shortstop, the Giants are expected to strengthen its infield.