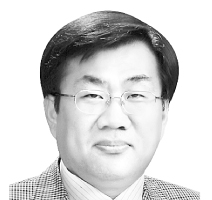 Ju Han-gyu
The author is a professor of nuclear engineering at Seoul National University.

Korea Electric Power Corporation (Kepco) has announced its business results for the third quarter. It showed 920 billion won ($781.4 million) in deficit in the first half, but thanks to the increased electricity sales in the summer, it had 1.2 trillion won in surplus. Yet the surplus in the third quarter is the smallest since 2011. This year’s deficit is expected to be greater than last year’s 208 billion won.

Kepco CEO Kim Jong-kap suggested the need for electricity price hikes to resolve its mounting deficit. He has recently proposed a scrapping of the electricity price special discount plan. The next day, Minister of Trade, Industry and Energy Sung Yun-mo said the idea would not be accepted, and a few days later, Kim retracted the proposal and said it needs to be discussed with the government.

According to the government’s basic plan for its second climate change action, which was finalized last month, Korea reinforced the plan to reduce greenhouse gas emissions. But because of the administration’s commitment to the phasing out of nuclear reactors, the greenhouse gas reduction goal is harder to accomplish.

First of all, an increase in thermal power generation in the past two years of the nuclear phase-out resulted in a 36 million-ton increase in greenhouse gas. In order to attain the 536 million-ton greenhouse gas emission limit by 2030, Korea needs to reduce it by 10 million tons every year, but over the last two years, greenhouse gas emissions increased continuously. Moreover, the plan with the premise of a nuclear phase-out does not have a specific action plan for the 34.1 million tons of additional reduction potential in the power generation.
If a 1 million kWh nuclear reactor is replaced with an LNG power plant, 3.5 million tons of carbon dioxide is generated, and Kepco’s purchasing cost goes up by 450 billion won. However, according to the government’s nuclear phase-out policy, 9.1 million kWh nuclear reactors will retire by 2030. Considering the suspended construction of Shin Haneul 3 and 4 rectors, 12 million kWh nuclear reactors will disappear.

If these reactors are revived, 42 million tons of carbon dioxide would be reduced and 5.4 trillion won in profit will be made. If we don’t stick to the nuclear phase-out policy which started without reasonable grounds, there will be a solution to the electricity bill and greenhouse gas issue. We need to get out of the anachronistic illusion of nuclear phase-out now.
Translation by the Korea JoongAng Daily staff.