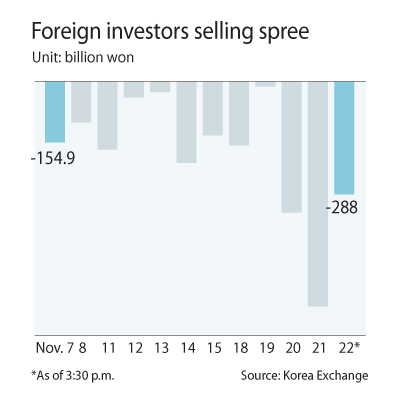 Foreign investors have sold off nearly 2 trillion won ($1.7 billion) of Korean stocks as a multitude of risks - the U.S.-China trade dispute, tensions between Korea and Japan and unrest in Hong Kong - weighed on the economy.

They offloaded 1.95 trillion won worth of Kospi stocks between Nov. 7 and Friday, becoming net sellers for 12 straight days. This is the longest net selling streak since a 13-session run between late July and mid-August this year.

“The talks toward a trade deal boosted local stock markets, but as conflicting signals for the trade negotiation arose, they suffered a correction,” said Han Dae-hoon, an analyst at SK Securities.

At the beginning of the month, local stocks rose after reports that the two economic superpowers agreed in principle to reduce tariffs in phases.

Expectations were quickly dashed as U.S. congressional support for pro-democracy activities and human rights in Hong Kong emerged as a new factor that might derail the discussions between the countries.

Analysts say the end of agreement with Japan could imperil the alliances with both Japan and the United States and trigger economic retaliation.

“[When Gsomia ends], worsening ties with Japan could be a problem,” said Kim Dae-joon, an analyst at Korea Investment & Securities. “But what is worse is the uncomfortable relations with the United States. Since Gsomia is directly related to U.S. security issues, the termination could cause worries that Korea will face possible retaliatory action.”

Kim offered various scenarios, but exports like machinery, automobiles and semiconductors are the most likely targets given that the United States is the second largest exporting destination for Korea.

The main index fell as much as 1.35 percent on Thursday as reports on a further delay of a formal agreement between China and the United States stoked investor concerns.

Next week’s focus will be the central bank’s announcement of a revised economic forecast for the year and a key interest rate decision.

The Bank of Korea will likely lower its current growth forecast of 2.2 percent.