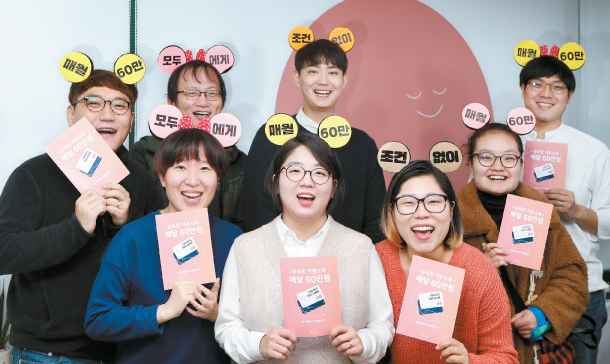 Yong Hye-in, 29, center, the standing representative of a preparatory committee for the establishment of a political party called the Basic Income Party, poses for a group photo with party members during a recent interview with the JoongAng Sunday at her office in Donggyo-dong, western Seoul. [SHIN IN-SEOP]

About 7,000 people in their 20s are joining together to not just express their disappointment in the current political parties but declare their intention to establish the Basic Income Party, which as the name implies, focuses on providing citizens with a basic income.

The main public pledge of the party is to provide all citizens about 600,000 won ($510) monthly in order to allow them to live “a life worthy of human beings.”

The Basic Income Party will become an official political party after it forms contingents in five or more cities or provinces. Each contingent must have at least one thousand members registered as residents in the corresponding districts.

The Basic Income Party has been gathering members online and has garnered a total of 7,000 so far. Since its launch in September, between 200 and 300 have applied to become new members of the party every month. The average age of the members is 22, and the proportion of males to females is about four to six. Of all members of the party, students, job seekers, unemployed people, and non-regular workers are in the overwhelming majority.

The party argues that people who own land should pay 1.5 percent to 2 percent of the land value in “possession tax” annually, based on the concept that all people living in this country are common owners of all the land in Korea.

Lastly, the fund for a carbon dividend will be made through carbon taxes that would be paid based on the amount of emissions. In order to act more proactively in the fight against climate change, the party said 100,000 won of carbon tax per 1 ton of carbon emissions would be an adequate amount.

The JoongAng Sunday recently sat down with Yong Hye-in, 29, the standing representative of a preparatory committee for the establishment of the Basic Income Party, at her office in Donggyo-dong, western Seoul.
Below are edited excerpts of the interview.

Q. What inspired you to establish a political party?

A. With the unceasing development of industry and economic structure caused by the fourth industrial revolution, our society is changing at a rapid speed. Although one of the critical roles of politics is to consider how our society should accommodate these changes, the existing political parties don’t seem interested in this issue. Instead, politicians are spending all their time in disputes. I thought we need a new party that discusses how to form a social consensus responding to changes, so I decided to establish a new party.

Why is your party’s focus basic income?

When we discuss basic income, we cannot exclude the issue of how society is changing and in what ways we should respond. Basic income is the only way to realize the law “All citizens shall be entitled to a life worthy of human beings” that is stated in the first clause of Article 34 of the Constitution.

What is the main public pledge of your party?

The main promise of our party is to provide all citizens about 600,000 won monthly in order to allow them to live a life worthy of human beings. If we gain a seat in the National Assembly next year through the general election, we plan to propose the law that provides basic income to all citizens.

The livelihood benefits of a person that the government set in accordance with the National Basic Living Security Act will be about 520,000 won a month next year. Since we thought that the basic income should be more than that, we set it at 600,000 won.

Do you think it is possible to live a life worthy of human beings with only 600,000 won?

We know that it will be difficult. However, the amount [of 600,000 won] can be a great help to people who don’t have any hope due to extreme poverty. It can act as a stepping stone for them to have a dream or even change their way of life.

Don’t you think a selection process is necessary considering how unrealistic it is to provide 600,000 won on a monthly basis to all citizens from those facing extreme poverty to those who are the heads of conglomerates?

The side effects, inefficiency and waste of money caused by a selection process are very serious problems. Also, as you can see from the recent tragedy of four family members committing suicide in Seongbuk District, [central Seoul], people easily fall into the dead zone of welfare. Furthermore, some people intentionally don’t get employed in order to remain recipients of basic living subsidies from the government. It costs a huge amount of money to conduct a selection process. I think providing the same amount of money to all citizens would be a better option to prevent side effects and maximize the effect of the basic income policy.

Will there be any changes in the existing welfare system if the basic income policy is put into practice?

The livelihood benefits of a person that the government set in accordance with the National Basic Livelihood Security Act and the benefits that are being provided to people according to their age including child benefits and basic income for youths will be integrated into basic income. Tens of trillions of won for the basic income policy will be made through the amount of money that will be saved by the integration process.

In order to give 600,000 won to over 50 million people on a monthly basis, the country needs 360 trillion won a year, which is over 70 percent of this year’s national budget. Do you have any specific plan on how to raise that amount?

After calculating the amount of money that the country should prepare for implementing the basic income policy [after the integration process], we found out that Korea needs approximately 120 trillion won a year. The national budget increased by about 113 trillion won over the past three years. With 113 trillion won, the country can provide about 200,000 won of monthly basic income to all citizens. If politicians achieve a social consensus and the government promotes the policy with strong determination, preparing the fund for the basic income policy is quite possible.

Is it true that your party is discussing the data dividend?

A few companies such as Google and Facebook have been monopolizing the profits made from big data that their users have produced. Since big data cannot be owned by individuals or particular companies, the enterprises that gained profits from it have an obligation to distribute part of those profits to the users. However, the data dividend is something that we need to discuss further; we didn’t include it as a component of basic income.

If the basic income policy allows people to live a life worthy of human beings, who would want to work?

Six-hundred thousand won is not that much money. If we implement the basic income policy, it will allow the unemployed people living in poverty to find work places. People who intentionally didn’t try to find jobs in order to remain recipients of basic living subsidies from the government can also earn the same amount of money while also working.

An argument against the basic income policy says that it hinders individuals from reaching self-realization through labor. What are your thoughts?

Labor itself is not divine; people who provide labor have dignity. People cannot reach their self-realization through scanning bar codes in convenience stores or giving people change at tollgates breathing in car fumes and fine dust. We should change society through the basic income policy so that people can live their lives doing what they really want to do.

Some people criticize that the basic income policy is a populist measure from left-wing groups. What do you think about this?

Many right-wing politicians support the basic income policy as well. The issue of basic income is something beyond the right or left as it aims to figure out how society is changing and the right measures that people need to take.

Many people in their 20s are a bit cynical about the Moon Jae-in administration. Why do you think this is?

It’s time to question if job creation and higher levels of economic growth are realistically possible. No jobs have been created in the private sector. In the situation in which the industrial structures have been changing fundamentally, sticking to “income-led growth” policy is so anachronistic.

What is your purpose and goal for next year’s general elections?

Our goal is getting 3 percent of the votes nationwide and earning a seat in the National Assembly. We are also discussing running in 10 different districts. Many young people in different parties support the basic income policy as well. Our ultimate purpose of our participation in next year’s general elections is to make the basic income a big issue so that many candidates who support it can gain seats in the National Assembly.