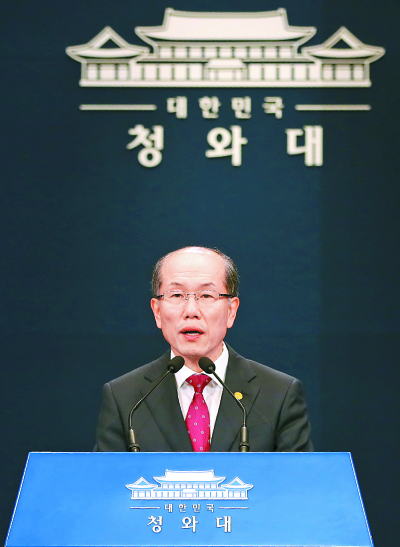 Korea announced Friday evening that it will suspend its decision to withdraw from a bilateral intelligence-sharing pact with Japan, backpedaling on its earlier announcement that it will terminate the agreement due to Tokyo’s export restrictions against Seoul.

Kim You-geun, the first deputy chief of the Blue House National Security Office, relayed Seoul’s decision to local reporters on Friday at 6 p.m., just six hours before the midnight deadline, by which Seoul had to determine whether or not it would follow through on its earlier decision not to renew the General Security of Military Information Agreement, or Gsomia.

Kim said Seoul has also decided to tentatively halt its petition procedures against Tokyo at the World Trade Organization (WTO), which were in response to Japan’s export curbs.

But the Blue House did not explicitly say that it will renew Gsomia or scrap the WTO petition, leaving open the possibility that it can reverse its latest decisions.

A high-level Blue House official said after Kim’s briefing that Seoul can “reactivate” its earlier announcement to withdraw from Gsomia — which would mean the termination of the pact “that very day.”

In a separate press briefing held around the same time Friday, Japan’s Ministry of Economy, Trade and Industry said Tokyo will not curb its strengthened controls on exports to Korea and that Seoul was still removed from its so-called white list of trusted trading partners.

In highly vague terms, Kim said, “Under the circumstance that [we] can terminate the effect of the General Security of Military Information Agreement at any time, our government has [decided] to halt the effect of our notification [to Japan] on Aug. 23, 2019, to terminate [Gsomia], and the Japanese government has expressed its understanding.”

Kim continued, “As long as talks on export management policy between Korea and Japan are held as normal, [Seoul] will halt the WTO petition procedure in regards to the export restrictions [against Korea] on three items.”

In mid-September, the Korean government took formal steps at the WTO to complain about Japan’s measures in July to strengthen controls on exports of three industrial materials to Korea — photoresists, hydrogen fluoride and fluorinated polyimide — which are essential for semiconductor and display production. Exports of the materials used to take one or two weeks prior to the measures, but they’re now subject to individual approval over a much lengthier process of up to 90 days.

The Blue House’s announcement that Seoul will not immediately terminate Gsomia caught local media by surprise. In the months and hours leading up to the announcement, top government officials had repeatedly said Korea won’t recant its decision to withdraw unless Japan lifts its export restrictions first — a move that seemed highly unlikely on Tokyo’s part.

Fanning speculation that Seoul would pull out of Gsomia was Korean President Moon Jae-in’s visit to a newly built silicon wafer plant on Friday morning in Cheonan, 84 kilometers (52 miles) south of Seoul in South Chungcheong, where he boasted Korea’s efforts to overcome the domestic supply crisis caused by Japan’s export restrictions.

Seoul’s announcement to withdraw from Gsomia was first made on Aug. 22 following Tokyo’s removal of Korea from a list of preferred trading partners.

Signed in November 2016, Gsomia has been renewed automatically every year since. In order for either country to terminate Gsomia, it had to inform the other country at least 90 days in advance. Seoul said Friday that from this time on, if Seoul decides to walk away from Gsomia, it can do so on the same day without the 90-day period.