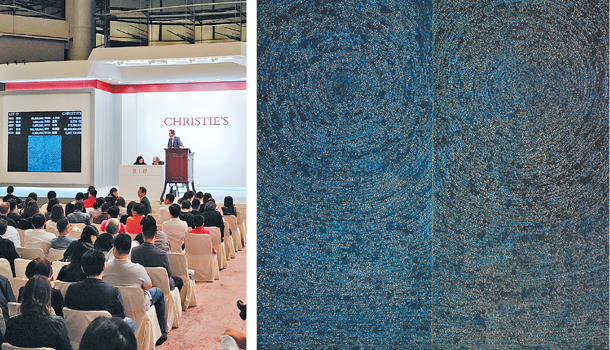 Kim’s largest painting, “05-IV-71 #200 (Universe)” (1971) sold for 88 million Hong Kong dollars ($11.2 million) on Saturday at Christie’s autumn auction held at the Hong Kong Convention and Exhibition Centre, breaking not only his own record, but also setting the record for the highest price any artwork by a Korean has fetched at auction. It was also the first time for a piece of Korean art to exceed the $10-million mark, which is said to be a direct indicator of whether a country’s art market has a competitive edge on the international stage. The price realized - which includes the final hammer price plus any fees - was a whopping 101 million Hong Kong dollars.

The bidding for Kim’s “Universe” took place on Saturday at the Evening Sale of “20th Century and Contemporary Art” as part of the two-day auction. Its price was estimated at 48-62 million Hong Kong dollars, or $6-8 million.

Kim’s work was the 17th lot on the list, and the bidding began at 6:08 p.m., 38 minutes after the auction began. It started at 40 million Hong Kong dollars, lower than the initial estimate, but quickly shot up. The last two contenders went head-to-head through the phone - one was represented by Lee Jun, general manager of Christie’s Korea, and the other by Francis Belin, president of Christie’s Asia. After a tense 10 minutes, “Universe” went to the anonymous bidder on the phone with Belin.

“To have a work that is traded at above 10 billion won [$8.5 million] means that Kim Whanki’s works have now entered the mainstream international market,” said Lee of Christie’s Korea. “It will also help the next generation of artists’ entrance into the global art market.”

Lee Ok-kyung, the vice president of Seoul Auction who was also at the convention center for Seoul Auction’s Hong Kong sale, said, “It is truly a historic moment for Korean art. The 10-billion-won mark will hopefully allow more Korean artists to debut into the global market.”

This autumn’s Christie’s auction was the first time “Universe” went on sale since its completion. The work, the only diptych and also the biggest work by Kim, was brought to Hong Kong by Matthew Kim and Chae Kum Kim, close friends of the artist who bought the piece from him. Since then, it has only been on display at the Whanki Museum in central Seoul. It is a work that’s not only the best of Kim, but also the best of Asia, according to Evelyn Lin, deputy chairman of Christie’s Hong Kong.

Kim currently holds the record for the top five highest-priced artworks in Korea. His red dot painting “3-II-72 #220” was sold for 8.5 billion won in May last year at Seoul Auction’s Hong Kong sale, marking a record at the time. His pink monochrome “Untitled” was sold for 7.1 billion won this year in April through Seoul Auction.