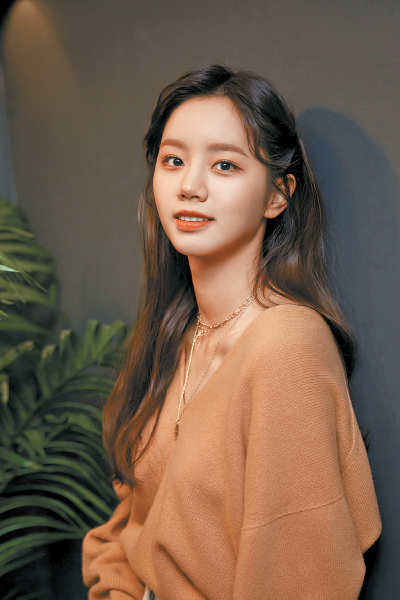 Actor Lee Hye-ri experienced many growing pains after her sudden rise to stardom with the hit TV drama series “Reply 1988” (2015-2016).

In the drama series, the singer-turned-actress plays the role of Deok-seon, a middle child who is always overshadowed by her siblings. She is clumsy, carefree and one of the lowest-scoring students in her class. But a lot of viewers related to the character and Lee eventually made a smooth transition from singer to actor.

Naturally, there were high expectations for Lee’s next project. The actor chose a role in “Entertainer” soon after “Reply 1988” came to an end, but was met with harsh reviews from the media and the public alike.

After “Entertainer,” Lee appeared in a couple more drama series, but viewers questioned her acting skills whenever she tried new projects.

Her most recent work, tvN’s “Miss Lee,” however, has Lee receiving positive reviews for the first time in years.

In “Miss Lee,” the 25-year-old actor plays the role of Lee Seon-sim. The character first joins a company as a low-level employee but later climbs up the corporate ladder and becomes the CEO of Cheongil Electronics, which is the backdrop of the drama series.

Ilgan Sports, an affiliate of the Korea JoongAng Daily, recently caught up with Lee to talk about her recent project.

Q. How do you feel after wrapping up the drama?

A. I can’t believe it has come to an end. It was a coveted character from the beginning, and I wanted to excel while playing her. I prepared a lot [for the drama]. A lot of people told me they really enjoyed it and said it was their favorite drama ever. I feel so flattered.

What made the character appealing?

When I received the script, I found myself with a lot of questions about the character and thought, “What’s wrong with her?” I wanted to embrace Seon-sim. I wanted to take her side and fight for her. [In order to understand the character] I asked many questions to my friends who are newbies at their companies.

What did they say?

They said they can’t really say “no” to their bosses. At first, I couldn’t understand them. But looking back on the days after I debuted, I could understand what they meant. I started with those little details [to build up the character].

There’s a first time for everyone. What was it like when you made your debut in the music scene?

I cried and vented my anger just like Seon-sim did in the show. But I couldn’t tell anybody what I had inside my mind. I just followed directions [of other people]. There were a lot of difficulties, and I was innocent.

How did you prepare for the drama?

The fictional company in the series was modeled after a real one, so all the actors, the director and the writer went there for a visit. We had meetings with employees and I met the CEO of the company. We talked a lot and it really helped me.

I was sad, but the viewership rating is not something we have control of. Once you are obsessed with it, you can’t really focus on filming. We tried to root for each other on the set.

Some critics said your depiction of Seon-sim is similar to your portrayal of Deok-seon from “Reply 1988.”

I never think “I will get away from Deok-seon” when I’m acting. The two characters are different but share some similarities. If I really wanted to put some distance from Deok-seon, I would choose a character that is the opposite of Deok-seon. I don’t want to erase Deok-seon, who is engraved in the minds of many viewers.

What was it like to play a lead role?

I was under a lot of pressure. I tried to talk a lot with the director. We used to meet between two to three times a week. I also spent a lot of time reading the scripts. But I had many experienced actors around me. I resorted to them a lot.

How do you assess “Miss Lee”?

It feels a little awkward for me to see myself in dramas and films. Even though I receive good feedback, I try not to be satisfied with it.

Your acting skills are often compared to those of Bae Suzy and Kim Seol-hyun, who all started their career as members of girl groups. What do you think of the comparison?

I’m well aware of it, so I try very hard. I know how much effort they put into their work. I couldn’t watch all the episodes of their dramas “Vagabond” and “My Country: New Age,” but I was curious about them, so I have been keeping an eye on them. I guess they probably see me as their companion [not as a competitor.]

We’re not dating that openly, many people are eager to know about us. We go out on dates whenever we have time.

How do you spend your days off?

I live with my parents. When I don’t have any shooting scheduled, we love to dine out. I also love to go to room escape cafes.

Ten years have passed. I’m afraid of getting old. I know I have to act like an adult, but I don’t think I’m ready for it. I’m afraid of taking all the responsibilities for my actions. I’m also a little worried about losing some of my childlike traits [as I get older.]

What are your immediate plans for the future?

I tend to live without a plan. When I plan something and the plan doesn’t go well, it makes me feel lost.