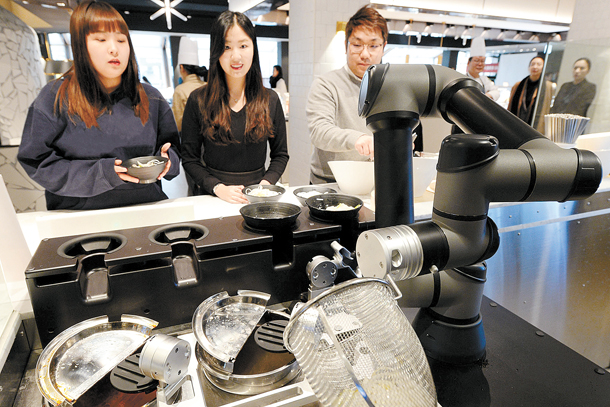 LG Electronics is working to boost its robot business through collaboration with CJ Foodville.

The electronics giant on Sunday said it demonstrated its CLOi Chefbot at a VIPS restaurant in Deungchon-dong in western Seoul’s Gangseo District on Friday. At the restaurant, the robot cooked and served noodle dishes.

The robot boiled ingredients like vegetables, cooked the noodles, combined them all in a bowl and gave that bowl to a customer. The entire process took less than a minute, according to LG.

The CLOi Chefbot operates using motion control technology. The software is based on the mapped movements of actual chefs, so the CLOi Chefbot is able to move like a professional, according to LG. It also includes a system designed to help the robot hold cooking utensils firmly.

LG’s robot could free restaurant workers from repetitive and dangerous chores, according to the company.

LG said it plans to expand and continue collaboration with CJ Foodville, which operates bakery Tous les Jours, Italian restaurant The Place and buffet restaurant Season’s Table, among others.

“We have come to be able to provide differentiated values to customers through the cooperation with CJ Foodville,” said a spokesperson for LG Electronics in a statement. “We will continuously try to find ways to enhance customer value by raising the utilization of robots and increasing the competitiveness of the robot business.”

LG said it plans to expand collaboration with start-ups and universities to jointly develop robots.

CLOi isn’t the only robot moving into the restaurant business.

Woowa Brothers, which operates food delivery platform Baedal Minjok, or Baemin, last week said its Dilly robots are ready to roll out into restaurants. Dilly is a food delivery robot. It is able to carry four trays weighing a total of 50 kilograms (110 pounds).