Over the past three decades, South Korea and the Association of Southeast Asian Nations (Asean) rapidly developed relations to become crucial strategic partners with vibrant diplomatic, economic and people-to-people exchanges.

Since then, the relationship was elevated to a full dialogue partnership in 1991, a comprehensive cooperation agreement in 2004 and a strategic partnership in 2010.

This year marks the 30th anniversary of relations between South Korea and Asean. Collectively, Asean has a combined GDP of $2.98 billion and a total population of over 654 million.

South Korea has actively pursued political and security cooperation with Asean, which has emerged a leader of diplomatic cooperation in the Asia-Pacific region.

The Asian financial crisis in 1997 was a key impetus for bolstering regional cooperation and the Asean Plus Three summit, with South Korea, China and Japan, and the Asean-South Korea Summit was launched that year.

In 1994, the Asean Regional Forum (ARF) was launched and has become a major security conference in the Asia-Pacific region which now involves all the members of the currently defunct six party nations for denuclearization talks with Pyongyang — China, Japan, Russia, the United States and the two Koreas. Global leaders also gather for the annual East Asia Summit which convenes alongside the ARF.

From 1987 to 2017, South Korea extended $1.8 billion in official development assistance grants and $2.6 billion in loans to Asean countries.

Asean has embraced the Korean Wave, or Hallyu, while Southeast Asia is the most popular travel destination for South Koreans, with a total of 11.4 million total people traveling between Korea and Asean last year. There were 8.98 million Korean travelers visiting Asean countries and 2.46 million Southeast Asian visitors to Korea in 2018.

South Korea established its mission to Asean in Jakarta, Indonesia, in 2012, where the Asean Secretariat is located, an indication of Seoul’s diplomatic outreach to the region. Likewise the Asean-Korea Centre, an intergovernmental organization in Seoul, was launched in 2009, and the Asean Culture House was opened in Busan in 2017.

The New Southern Policy was unveiled by the Moon Jae-in administration in 2017 as a vision of economic and diplomatic cooperation with Asean and India. It places South Korea’s relations with Asean on par with the big four countries, the United States, China, Japan and Russia, and is seen as a way of diversify Seoul's diplomatic portfolio. The policy is built on the “three pillars” of “People, Prosperity, and Peace,” which also corresponds with the three pillars of the Asean Community unveiled in 2015 which are the political and security community, the economic community and the sociocultural community.

The third special summit, the 2019 Asean-Republic of Korea Commemorative Summit, will be held on Nov. 25 and 26 in Busan. The 1st Mekong-Korea Summit will take place the following day on Nov. 27, involving the countries along the Mekong River: Cambodia, Laos, Myanmar, Thailand and Vietnam. The special summit is expected to look back on the 30 years of South Korea’s relations with Asean and plan ahead for the coming decades. 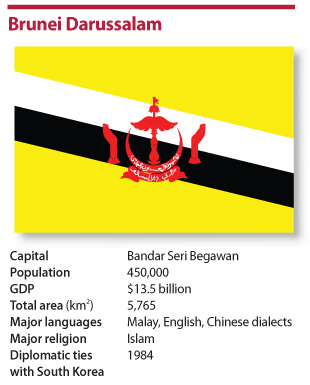 Brunei Darussalam became Asean’s sixth member on Jan. 7, 1984, right after the country gained independence from Britain. South Korea and Brunei established diplomatic relations the same year. South Korea established its consulate general in Bandar Seri Begawan, the capital city of the nation located on the island of Borneo, in September 1983, and this became ambassadorial level on Jan. 1, 1984.

Bilateral trade between the two countries last year amounted to $670 million, with exports to Brunei being $60 million and imports being $610 million. Crude oil and natural gas production accounts for more than 95 percent of Brunei’s exports and around 65 percent of its GDP. South Korea imports over 1 million tons or about 4.3 percent of its liquefied natural gas (LNG) supply from Brunei annually.

The Brunei Vision 2035 is the country’s long-term economic development plan to create new growth engines and has eight strategies covering areas including education, economy, security and infrastructure development. During President Moon Jae-in’s state visit to the country in March, the two sides agreed to advance cooperation in information and communication technology, smart cities and renewable energy and defense.

Bilateral diplomatic relations between South Korea and Cambodia were established on Oct. 30, 1997 after an official state visit by Cambodian Prime Minister Hun Sen to Seoul in 1996. However, the history of bilateral relations can be traced to 1970 when the U.S.-backed Lon Nol government came to power. A South Korean Embassy in Cambodia was established in 1970, but that embassy was closed as the bilateral relationship was severed when the Khmer Rouge came to power in 1975. Cambodia joined Asean in April 30, 1999. In 1998, the South Korean Representative's Office in Cambodia was elevated to an embassy, and in 2001, the Cambodian Embassy in South Korea was established.

Bilateral trade between the two countries last year rose by 11 percent and amounted to $970 million. Korean exports to Cambodia amounted to $660 million, and imports were at $310 million in 2018. Investments came to a cumulative total of $5.8 billion as of 2018. More than 300 South Korean companies are doing business in Cambodia.

The South Korean government invested $632 million in development cooperation in Cambodia from 1996 to 2018. From 2019 to 2023, South Korea plans to provide an additional $200 million in concessional loans.

Indonesia and South Korea established diplomatic relations on Sept. 17, 1973. However, the two countries’ consular-level relationship dates back to August 1966. Indonesia is one of the five Asean founding members that signed the Bangkok Declaration in 1967. Jakarta is also the host of the Asean Secretariat established in February 1976. The Mission of the Republic of Korea to Asean was established on October 2012 in Jakarta.

During a state visit to Jakarta in November 2017, South Korean President Moon Jae-in and Indonesian President Joko Widodo agreed to elevate the two countries’ bilateral relations to a special strategic partnership through the “Korea-Indonesia Joint Vision Statement for Co-Prosperity and Peace." The vision statement focuses on four areas of cooperation: defense and foreign affairs, bilateral trade and infrastructure development, people-to-people exchanges and regional and global cooperation. In 2012, Indonesia and South Korea agreed to establish the Indonesia-ROK Comprehensive Economic Partnership (IK-CEPA) to increase trade and economic relations.

In October this year, South Korea reached a preliminary agreement with Indonesia on the Comprehensive Economic Partnership Agreement ahead of the conclusion of a final deal within this year.

South Korea and Indonesia are also members of Mikta, a group of middle powers in the G20. 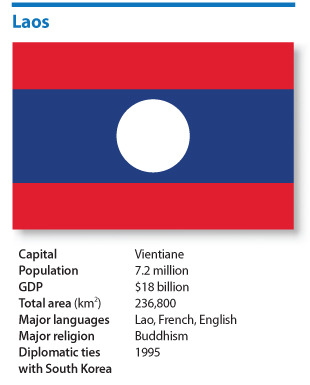 Laos envisions becoming the "battery of Southeast Asia" with its strategic location sitting on the Mekong River, which flows through 1,835 kilometers (1,140 miles) of the country from its north to its south, and having invested heavily in hydroelectric power and building dams on the main stream and its tributaries.

South Korea plans to offer $500 million to Laos through the Economic Development Cooperation Fund between 2020 and 2023. South Korean investment in Laos ranks fifth in foreign direct investment at $270 million in 39 projects from 2010 to 2018.

Malaysia has seen an annual growth of over 5 percent on average. Bilateral trade between South Korea and Malaysia last year amounted to $19.2 billion.

South Korea and Vietnam established diplomatic relations on Dec. 22, 1992. Vietnam joined Asean as the seventh member on July 28, 1995.
In 2009, Vietnam and South Korea upgraded their bilateral relationship to a strategic cooperative partnership. The South Korea-Vietnam free trade agreement (FTA) came into effect in December 2015, expanding economic cooperation between the two countries. After the FTA went into effect, South Korea is now Vietnam's second-largest trading partner, and Vietnam is South Korea's fourth-largest trading partner after China, the United States and Japan.

The total bilateral trade volume last year amounted to $68.3 billion, compared to $500 million in 1992 when they first established diplomatic relations. South Korean exports to Vietnam amounted to $48.6 billion, and imports were at $19.6 billion in 2018. Vietnam’s estimated economic growth rate is over 7 percent.

Vietnam is also a popular tourist destination for South Korea. In 2018, over 3.45 million South Korean visitors went to Vietnam, up 44 percent from the previous year, while there were 519,448 Vietnamese visitors to South Korea, according to the South Korean Ministry of Foreign Affairs. There were 172,684 Koreans living in Vietnam — including breakout star, Park Hang-seo, who recently renewed his contract as coach to the Vietnamese men's national football team — in 2018. Likewise, 196,633 Vietnamese were living in South Korea as of last year. Vietnam is also home to more than 7,000 South Korean companies. 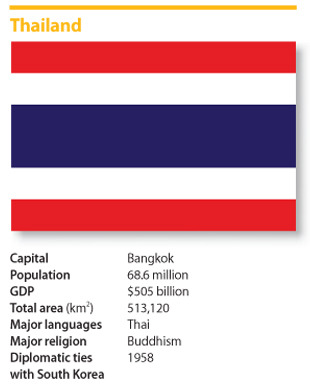 Thailand was the second nation after the United States to send troops to support South Korea during the 1950-53 Korean War, deploying over 6300 soldiers. The Thai casualties included over 130 dead and hundreds more who were wounded. Thailand and South Korea established diplomatic relations on Oct. 1, 1958, through the issuing of a joint communiqué. However, ties between the countries can be traced back to the late 14th century, when Siamese envoys were granted an audience with King Gongyang, the last king of the Goryeo Dynasty (918-1392).

Asean was founded on Aug. 8, 1967, in Bangkok, and Thailand is one of the five Asean founding members along with Indonesia, Malaysia, the Philippines and Singapore that signed the Bangkok Declaration.

Bilateral trade between the two countries last year amounted to $14.1 billion. South Korean exports to Thailand amounted to $8.5 billion, and imports were at $5.6 billion in 2018. More than 400 South Korean firms do business in Thailand, the second-largest economy in Southeast Asia after Indonesia. 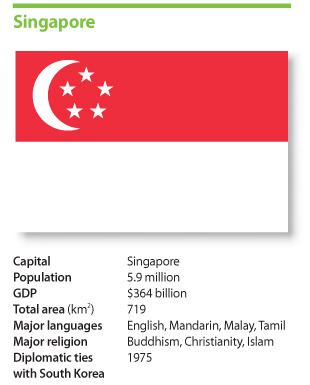 Singapore, slightly bigger in size than South Korea’s capital city of Seoul, is one of the five Asean founding members that signed the Bangkok Declaration in 1967. Singapore and South Korea established formal diplomatic relations on Aug. 8, 1975. However, over a decade before that, South Korea established a trade office, the Korea Trade Centre, in 1964 and a consulate general in 1971.

The South Korea-Singapore free trade agreement took effect in 2006, a key milestone in bilateral relations. Bilateral trade between the two countries last year amounted to over $19.8 billion. South Korean exports to Singapore reached $11.8 billion, and imports were at $8 billion in 2018. Investment amounted to a cumulative total of $5.6 billion as of 2018. In 2018, South Korea was Singapore’s 9th-largest trading partner and Singapore was the 6th largest investor in South Korea.

After the armistice agreement ending the war, South Korea sent its first ambassador to the Philippines in January 1954, and in May that year, the Philippines established a legation in Seoul. The Philippine Embassy in Seoul opened four years later in 1958 under Ambassador Eduardo Quintero. The Philippines is also one of the five Asean founding members that signed the Bangkok Declaration in 1967. 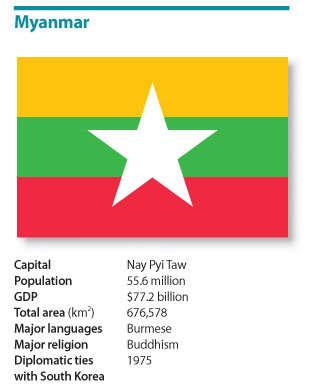 Myanmar, a country rich in natural resources that borders China and India, provided South Korea with some $50,000 worth of rice during the 1950-53 Korean War. Diplomatic relations between South Korea and Myanmar were established on May 16, 1975. Myanmar along with Laos joined Asean on July 23, 1997.

Bilateral trade between the two countries last year amounted to $1.07 billion, with nearly equal trade and export volumes. Investment came to a cumulative total of $5.7 billion as of 2018. South Korea is the sixth-largest foreign investor in Myanmar.

Myanmar, with over 55 million people, has a relatively young population with about half the population under the age of 30.

South Korea plans to double its aid for Myanmar through the Economic Development Cooperation Fund to $1 billion between 2018 and 2022, in comparison to the previous five years. South Korea is helping to build the Korea-Myanmar Friendship Bridge over the Yangon River, linking downtown Yangon to Dala Township. The two countries are also planning the Korea-Myanmar Industrial Complex, a joint industrial complex in Hlegu Township, north of Yangon.