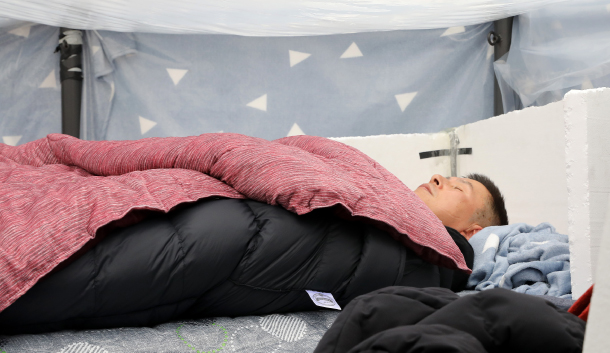 Hwang Kyo-ahn, chairman of the main opposition Liberty Korea Party, lies down in a makeshift tent near the Blue House on Sunday on what was the fifth day of a hunger strike that he has been staging. [NEWS1]

Rival parties are digging in their heels as a highly contentious electoral reform bill is set to be introduced to a plenary session of the National Assembly on Wednesday.

The bill, which tentatively proposes to adjust the proportion of single-member constituencies to party-list seats in the 300-member legislature, has been subject to immense political controversy, with the main opposition Liberty Korea Party (LKP) declaring it would do everything to block a four-party coalition led by the ruling Democratic Party (DP) from pushing through a vote.

The smaller parties, like the Bareunmirae Party (BP), Party for Democracy and Peace and Justice Party, as well as a host of independent lawmakers aligned with the DP bloc, continue to pressure the DP into formalizing this inter-party alliance to expedite the bill’s passage regardless of opposition from the LKP.

“Political reform is a mandate from the people that can no longer be pushed off,” said the BP’s spokesman, Kang Shin-yup, in a statement released on Sunday. “Any attempt to derail electoral reform is an anti-democratic and regressive action.”

For the DP, which may find its seat share eroded under a new electoral calculus, support for electoral reform remains a reluctant compromise, given that its junior allies have made their support on another set of contentious reform bills - those relating to judicial and prosecutorial reform - contingent on the electoral reform bill when both proposals were fast-tracked at the National Assembly amid violent wrangling between lawmakers.

A source in the DP told Yonhap News Agency on Sunday that the party would likely begin negotiations with the smaller parties this week to iron out the electoral reform bill independently from the LKP, as the latter continues to insist that the proposal be retracted and refuses to engage in discussions. DP floor leader Lee In-young has ordered ruling party lawmakers to remain on alert and refrain from foreign trips until Dec. 15, suggesting the parties may put the electoral bill to a floor vote within that timeframe.

In a meeting he hosted for the legislature’s floor leaders on Nov. 12, National Assembly Speaker Moon Hee-sang said the parties should vote on the fast-tracked bills all at once after Dec. 3, when the judicial reform bills are set to be formally introduced to the Assembly’s plenary session. As it stands currently, the four parties and their independent allies have the absolute majority necessary to make the bills into law in the Assembly.

LKP Chairman Hwang Kyo-ahn, who has been staging a hunger strike in front of the Blue House for five days as of Sunday, told LKP floor leader Rep. Na Kyung-won on Saturday that the initial motive behind his protest was to stop the electoral bill from moving forward.

As it did with great desperation in April, when LKP lawmakers attempted to physically stop the DP and the smaller opposition parties from fast-tracking the bills, the LKP is expected to resort to unorthodox and controversial methods to obstruct the bills when they are put to a vote, with rumors circulating that its members could stage a filibuster on the National Assembly floor.

Yet even among the allied parties, positions vary widely on how to change Korea’s legislative elections. The tentative proposal so far has been to decrease single-member constituency seats from the current 253 to 225, while increasing proportional representation seats from 47 to 75, but the BP and Party for Democracy and Peace oppose making such a significant cut to regional constituencies given their reliance on the rural districts that would likely get the axe under the new system. The DP’s rural-based lawmakers have also put strong pressure on its leadership to reconsider this option, stressing the uncertainty of the outcome of the upcoming parliamentary elections in April under this proposed new system. The left-wing Justice Party, on the other hand, which has a relatively even spread of support nationwide but lacks dominance in most constituencies, says the current proposal must be maintained for the sake of enhancing the proportionality of the country’s electoral system.