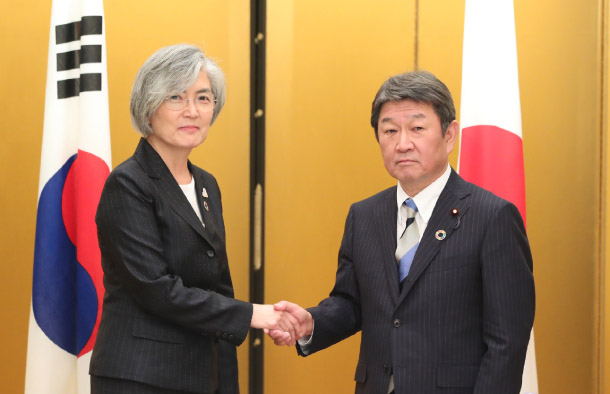 Korean Foreign Minister Kang Kyung-wha, left, shakes hands with Japanese Foreign Minister Toshimitsu Motegi, ahead of bilateral talks on the sidelines of a Group of 20 foreign ministerial meeting in Nagoya, Japan, on Saturday, after Seoul announced it will suspend its decision to terminate the General Security of Military Information Agreement the previous day. [MINISTRY OF FOREIGN AFFAIRS]

Seoul and Tokyo are coordinating the first bilateral summit between the two countries’ leaders in over a year alongside a trilateral meeting with China scheduled for next month, which could possibly lead to some breakthrough in deadlocked relations between the two neighbors that are riddled with historical and trade disputes.

A day after Seoul announced that it will conditionally suspend its decision to terminate the General Security of Military Information Agreement (Gsomia) with Tokyo, Korean Foreign Minister Kang Kyung-wha held talks with her Japanese counterpart, Toshimitsu Motegi, on the sidelines of a Group of 20, or G-20, foreign ministerial meeting in Nagoya, Japan, on Saturday.

Kang’s and Motegi’s talks lasted 35 minutes, double the allotted time. After the meeting, Kang confirmed that the two sides agreed to coordinate to schedule a summit between Korean President Moon Jae-in and Japanese Prime Minister Shinzo Abe on the sidelines of a trilateral summit next month with Chinese President Xi Jinping scheduled to be held in Chengdu, the capital of China’s southwestern Sichuan Province.

Moon and Abe last held a bilateral summit in September 2018, on the sidelines of a United Nations General Assembly session in New York City, though they held brief, informal talks amid Asean-related meetings in Bangkok at the beginning of this month, upon the initiative of the Korean president. Since Moon took office in May 2017, he has had five summits with Abe.

“There has been a slight breakthrough through the Gsomia extension,” Kang told reporters afterwards. “We don’t have a lot of time, so we decided to progress separate talks between Korean and Japanese export and foreign affairs authorities.”

Motegi likewise told reporters after the meeting that they “came to a consensus on holding a Korea-Japan summit” coinciding with the trilateral summit scheduled to be held in late December in China.

Seoul’s last-minute decision to keep Gsomia for the time being came just six hours before the bilateral pact was set to expire Friday midnight. The Blue House has stressed that the suspension of the Gsomia termination is conditional and can be revoked at any time. Seoul will be temporarily halting its petition to the World Trade Organization over Japan’s export restrictions while negotiations between the two countries are underway. Japan’s Trade Ministry in turn said it will resume talks between export control officials that have not taken place in over three years.

First signed November 2016, Gsomia is automatically renewed unless either country informs the other it will terminate the pact 90 days in advance. Seoul announced its decision on Aug. 22 to terminate Gsomia after Japan’s export restriction measures including its removal of Korea from its so-called white list of preferred trading partners.

Seoul deciding to keep Gsomia on a conditional basis earns time to negotiate persisting fundamental issues, namely Seoul’s call for the withdrawal of export restrictions and Tokyo’s protests against the Korean top court’s rulings on forced labor victims last year. Japan in July implemented exports restrictions of three materials to Korea essential for semiconductor and display production and the following month removed Korea from its white list of preferred trading partners, though it officially cited security and trust issues rather than the forced labor issue.

Korea’s decision to conditionally suspend terminating its bilateral intelligence-sharing pact with Japan Friday has brought about mixed responses amongst the three countries reflecting different priorities. The United States immediately praised the decision, while Abe called the move a “strategic” decision by Seoul.

The Korean Foreign Ministry said in a statement that Kang in her talks with Motegi lauded the commencement of talks between the two countries’ export authorities and again “stressed the importance of the withdrawal of Japan’s export control measures as soon as possible and for the talks between the export authorities that will be held to ultimately lead to the withdrawal of these measures.”

She also shared with Motegi the importance of Korea-Japan relations and the two sides “agreed to continue communication and discussions in order to ease the forced labor victim ruling issue.”

The Korean Foreign Ministry said in a separate statement that Kang in her talks with Sullivan said Korea is putting in efforts into an early solution to issues between Seoul and Tokyo including Gsomia and Japan’s export restrictions and requested that the United States “play a constructive role in this process.” Sullivan in turn “welcomed” continued dialogue between Seoul and Tokyo through reasonable methods, reaffirming the ironclad Korea-U.S. alliance, and hopes to “advance Korea-U.S.-Japan cooperation,” the ministry added. Sullivan also wished success for the Asean-Republic of Korea (ROK) Commemorative Summit kicking off in Busan today and called for continued cooperation between Korea’s New Southern Policy and the U.S. Indo-Pacific strategy. The two also reached consensus to closely communicate on resolving key alliance-related issues including the defense cost-sharing negotiations and also agreed to cooperate for the early resumption of North-U.S. denuclearization talks.

A U.S. State Department spokesperson in a statement immediately after Seoul’s announcement said, “The United States welcomes the ROK decision to renew Gsomia,” adding that the “decision sends a positive message that like-minded allies can work through bilateral disputes.”

Washington has been the most vocal advocate of maintaining Gsomia, seen to be symbolic of trilateral security cooperation with Seoul and Tokyo, especially against possible Chinese and North Korean threats.

Sullivan and Motegi during their bilateral talks, according to the U.S. State Department in a statement on Saturday, “pledged to continue to work closely across a broad agenda of regional and global security issues, including U.S.-ROK-Japan trilateral cooperation, and close coordination to ensure the final, fully verified denuclearization of the Democratic People’s Republic of Korea,” referring to the North’s official name.

Abe said Friday that it is “extremely important” for the Seoul, Washington and Tokyo “to cooperate and coordinate to cope with North Korea.”

Motegi likewise stressed that the trade restrictions and Gsomia are separate issues. He told reporters in Nagoya Saturday that Japan’s priorities remain the same and that Korea must “eliminate the current situation that violates international law,” in reference to the forced labor issue.

The Asahi Shimbun Sunday reported that Abe said to people around him that “Japan hasn’t yielded in any way” and that Korea “gave in because the United States is strong.”

The Blue House on Sunday expressed strong regret about the Japanese government possibly intentionally leaking the Gsomia extension decision to press ahead of the planned joint announcement time and also for distorting facts.

In response to Abe’s claims that Japan did not yield anything, a senior Blue House official said that it would be “extremely disappointing” if the report were true and questioned “if the leader of Japan could make such remarks with good conscience.”

The Blue House said it requested an apology from the Japanese government over such unnecessary remarks and received one.

He said in a press briefing in Busan that if such actions by Japan are repeated, “this could make progress in negotiations between Korea and Japan very difficult.”

The Korean Supreme Court ruled last year that Japanese companies must pay compensation to individual Korean victims of wartime forced labor. The rulings have been fiercely protested by Tokyo, which maintains that all compensation issues have been resolved with the 1965 bilateral claims agreement which provided Korea with an economic cooperation fund.

In June, Seoul proposed a joint fund comprised of voluntary contributions by companies from both countries to compensate the wartime forced labor victims, referred to as the one-plus-one plan. The proposal was immediately rejected by Tokyo, however various iterations of the plan have been proposed since. Korean National Assembly Speaker Moon Hee-sang during a visit to Tokyo at the beginning of the month proposed creating a joint fund comprised of voluntary contributions of Korean and Japanese companies and the public.