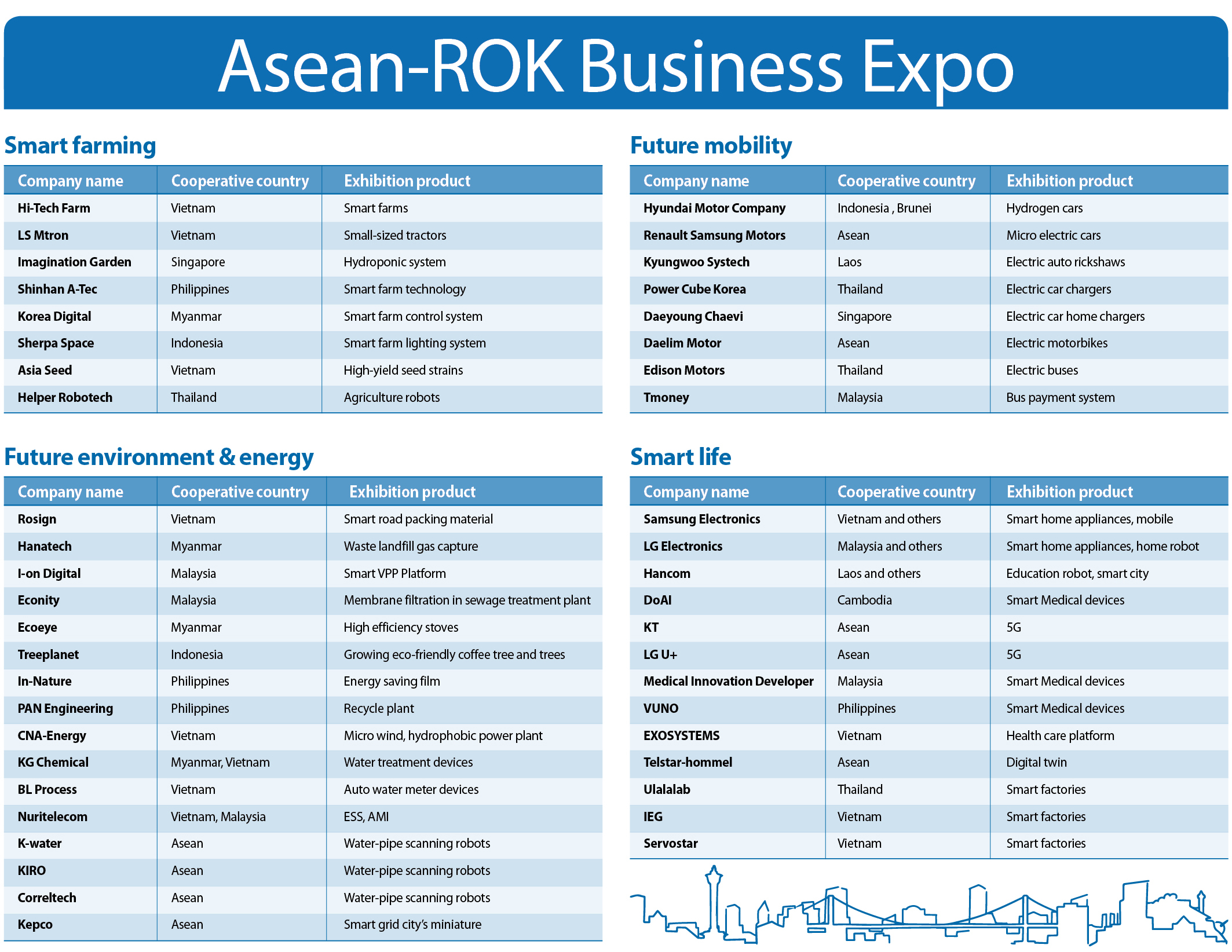 As Korea welcomes Asean for a special summit in Busan today and tomorrow, the state-backed Korea Trade-Investment Promotion Agency (Kotra) is hosting four trade fairs and conferences on the sidelines to showcase the latest technologies from Korean companies and their cooperative efforts with Asean.

The group of 10 countries has increasingly grown in importance as a major trading partner for Korea since a free trade deal went into effect in 2007.

According to the Ministry of Trade, Industry and Energy, Korea exported $100.3 billion worth of products to Asean in 2018, compared to just $41.0 billion in 2009. In fact, taken as a trading bloc, Asean was Korea’s second-largest trading partner last year.

Korea’s efforts to court the group have also picked up under President Moon Jae-in’s New Southern Policy that seeks to improve relations with the group to diversify from Korea’s traditional trade reliance on China and the United States.

At the Asean-Korea Innovation Showcase, 45 companies will display technology and projects that is being developed with Asean in four areas: mobility, lifestyle and health care, agriculture and environment and energy sectors.

Automakers such as Hyundai Motor and Renault Samsung Motors will take the stage in the mobility section with six other companies to show off their efforts to develop the sector in collaboration with their Asean-based partners.

Amid Korea’s recent bet into hydrogen technology, Kotra will feature fuel-cell electric vehicles (FCEV) at the fair, including motorcycles and auto rickshaws equipped with the technology as an example of how such vehicles could roll out in the Asean market.

Hyundai Motor’s booth will display its efforts to push FCEVs into the Indonesian and Bruneian markets and its vision of an eco-friendly Asean auto market.

It currently manufactures the miniature vehicle at its Busan plant.

Korea’s IT heavyweights, including Samsung Electronics and LG Electronics, will be present in the Smart Life section of the show.

Samsung Electronics will showcase its smart home appliances, while LG Electronics and LG U+ will display Internet of Things products designed for the office using the superfast 5G network.

KT will also be present at the show.

The company is currently looking to deploy its 5G network technology in Asean, with support from the Korean Ministry of Science and ICT.
In the Future Environment and Energy corner of the fair, 16 companies will showcase environmentally-friendly smart grid systems and energy storage systems.

Social venture Tree Planet will share its efforts to develop an eco-friendly coffee farm in Indonesia.

Seoul-based Rosign will showcase its road pavement material targeted for the Vietnamese market at the show. The company has created a joint venture with Vietnam’s Bidico and is expected to establish a manufacturing plant in the country next year.

In the Smart Farming section, 13 companies will show off the newest agricultural technologies, including LS Mtron’s small-sized tractor geared exclusively for Southeast Asia.

Start-up Sherpa Space will also offer visitors a chance to taste its specially-bred strawberries that are grown in container farms at the fair.

Kotra expects its Smart City Fair to serve as a platform to connect Korean and Asean companies.

Thailand’s Digital Economy Promotion Agency and Surbana Jurong, a Singaporean consulting agency, will hold sessions to explain their projects at the conference.

According to Kotra, 27 companies and institutions from Asean seeking smart city partners and 130 Korean companies will be present at the conference.

The Ministry of Land, Infrastructure and Transport will host the main smart city event at Bexco, the Asean-Republic of Korea Smart City Fair 2019.

The fair, which runs until Wednesday, will host a total of 21 countries including the 10 Asean members and will have 220 booths from 119 smart-city-related companies.

Korea will exhibit its own efforts to develop smart city technology.

Sejong and Busan are currently designated as two of Korea’s smart city test beds. The government plans to incorporate artificial intelligence to introduce a self-driving shuttle service and emergency-response drones in Sejong.

Busan is currently working toward creating a combined control center for planned robot services, such as parking robots and medical centers that utilize robot assistance.

Korean companies have aggressively expanded into Asean in recent years.

According to Korea’s Ministry of Economy and Finance, the number of newly registered Korean companies in Asean stood at 1,292 last year compared to 850 in 2014.

Kotra expects the Invest Asean event at Bexco to help provide more investment opportunities in the region as 75 investment agencies and related institutions from Asean countries will attend the event.

Each Asean country will have its own investment booth to share information to Korean companies. There will also be separate sessions on investment opportunities.

The projects will focus beyond Asean and into Africa and Central and South America.