Korean football legend Cha Bum-kun received the Federal Cross of Merit from the German government Friday for his contribution to the relationship between the two countries.

German Ambassador to Seoul Stephan Auer delivered the decoration from German President Frank-Walter Steinmeier in a ceremony at the German Embassy in Seoul. It’s the highest tribute Germany can pay to a foreign civilian. 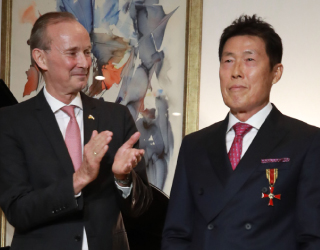 “It’s an honor to receive this order of merit,” Cha said at the ceremony. “I’d like to thank the German government for this opportunity.”

Cha, who is known as Tscha Bum in Germany, played in the Bundesliga in Germany from 1978 to 1989. Scoring 98 goals in 308 matches, he was rated as one of the best Asian players in the top German league.

He also won two UEFA Cups, one each with Eintracht Frankfurt and Bayer Leverkusen.

Counting all European competitions, Cha had 121 goals in 372 matches. It was an all-time record for a Korean player in European club football until Tottenham Hotspur star Son Heung-min surpassed the mark earlier this month.

Cha coached Korea at the 1998 FIFA World Cup and was recognized as the Asian Coach of the Year for 1997 by the Asian Football Confederation.

But Cha had far more success coaching at the club level. He won eight domestic and continental trophies with Suwon Samsung Bluewings in the K League, including the league championships in 2004 and 2008. He was named the K League Coach of the Year in both of those seasons.

In 2017, he became the first football player to enter Korea’s Sports Hall of Fame.

Cha said Germany, much like South Korea and North Korea, was once a divided nation, and the way Germany overcame its difficulties to develop into one prosperous country makes it a “role model” for Korea.

“Michael Ballack, who was born in the old East Germany, captained the German national football team, and Germany was able to become one through things like that,” Cha noted. “I believe the Korean people have strong football DNA, and I dream of seeing the two Koreas become one through football. And I think my friends in Germany will help me realize this dream.”