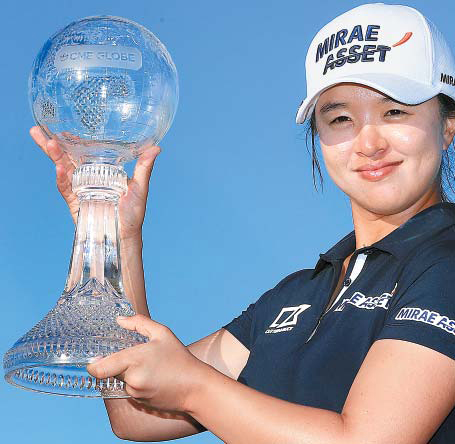 A win at the season finale not only gave Kim Sei-young the largest winning purse in the history of women’s golf, but also a big jump up in the world ranking.

According to the latest world ranking announced Monday, Kim moved up five spots, from 11th to 6th. This makes her the third-highest ranked Korean golfer, after No. 1 Ko Jin-young and No. 2 Park Sung-hyun.

Kim picked up a thrilling victory at the 2019 CME Group Tour Championship in Naples, Florida, by finishing her round with a birdie on Sunday. This was Kim’s 10th win on the LPGA Tour and earned her a prize money pot of $1.5 million, the largest in women’s golfing history.

Kim has had quite an inconsistent season but ended in style. Since the Volunteers of America Classic on Oct. 3, Kim has seen a run of top-10 finishes culminating in the season finale. Kim picked up three wins this season, the second most for the year after Ko.

Her strong finish is also a positive, not only as an indicator for her performance next year, but also for the Olympics. As today’s ranking is the last one for 2019, Kim has now increased her chance of making a second straight appearance at the Olympics next year. The players that will compete at the Olympics will be determined according to the world ranking as of June 29 next year.

As things stand, Korea is most likely going to have four golfers qualify for the Games next year.

Aside from Ko, Park and Kim, the LPGA Tour’s 2019 Rookie of the Year Lee Jeong-eun was another Korean golfer ranked inside the top-10. Lee dropped three spots, but still finished ranked ninth.