Fans wait with baited breath to see if Lindblom will stay

Fans wait with baited breath to see if Lindblom will stay 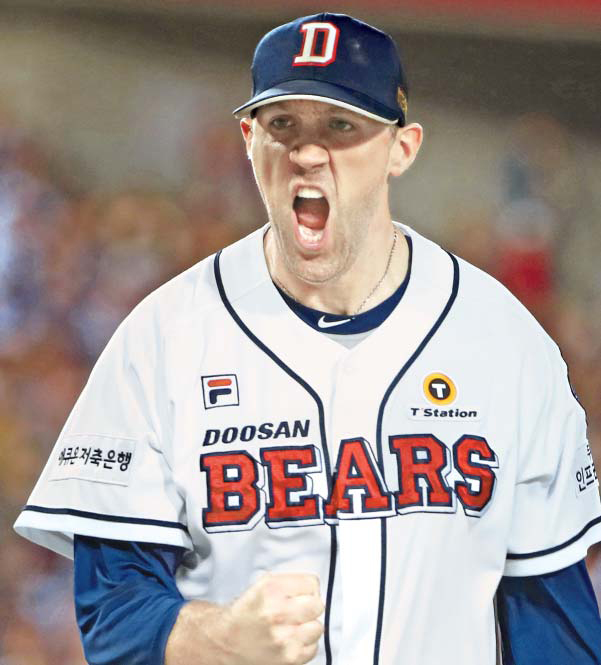 Following a successful end to the year, 2019 MVP Josh Lindblom is still making headlines - this time over whether the All-Star pitcher will stay in the KBO.

Lindblom was the KBO’s most dominant pitcher this season and the only one to pick up 20 wins. He led the league in strikeouts, at 189, and innings pitched, at 194 and two thirds of an inning.

Lindblom finished second in ERA, at 2.50, but that didn’t prevent him from winning the regular season MVP award, with a huge 716 points. In addition to the MVP, Lindblom won the Choi Dong-won Award for the second straight year, which is the KBO’s version of Cy Young Award.

Throughout Lindblom’s five seasons in the KBO, he has picked up 63 wins and 34 losses with a 3.55 ERA. His career took a turn when he joined the Bears for the 2018 season, where he had a 2.88 ERA and picked up 15 wins and four losses. He improved those numbers once again this year.

After being named the best player in the KBO, fans are desperately searching for some indication of whether Lindblom will stay or not. Toward the end of the season, a number of major league scouts were seen visiting Jamsil Baseball Stadium to watch him play.

However, once the season ended, the Doosan Bears made it clear they wanted to re-sign Lindblom. No decision has yet been made.

If Lindblom does decide to head back to the majors, he will become the third foreign player in the KBO to make a successful return to the big leagues. However, at 32, Lindblom is older than the two previous players to have made the transition back.

Each year, a number of minor league players sign with KBO teams hoping to gain experience by playing more games, presumably with the goal of one day heading back to the majors. While many head back to the United States by failing to re-sign with the KBO clubs and restart their careers in the minors, only two foreign players have successfully earned a full-time slot in the major league.

Eric Thames was the first player to make a triumphant return. After playing mostly in the minor leagues, Thames made his KBO debut with the NC Dinos in 2014. He had an impressive first season with the Dinos with a 0.343 batting average, 37 home runs and 121 RBIs. Things got even better in 2015.

Thames had a 0.381 batting average with 47 home runs and 140 RBIs. By stealing 40 bases, Thames became the KBO’s first-ever player to join the 40-40 club. His performance was also good enough to see him named the league’s regular season MVP, at the time the third foreign player to win the award.

After winning MVP, Thames played one more season in the KBO and again dominated with a 0.321 batting average and 40 home runs. When his third season with the Dinos ended, Thames headed back to the major league, signing a three-year contract with the Brewers at $16 million. With that signing, Thames became the league’s first foreign player to successfully head back to the majors.

In his first season with the Brewers, Thames hit 31 home runs with a 0.247 batting average throughout 138 games.

Last year, the SK Wyverns’ Merrill Kelly made his return to the majors by signing a two-year contract with the Arizona Diamondbacks.

Kelly played four seasons in the KBO with the Wyverns, and throughout his time in Korea he picked up 48 wins and 32 losses with a 3.86 ERA. In 2018, his last season in the KBO, Kelly successfully helped the Wyverns win the Korean Series title.

During his first season with the Diamondbacks, Kelly also met expectations, picking up 13 wins and 14 losses with a 4.42 ERA.