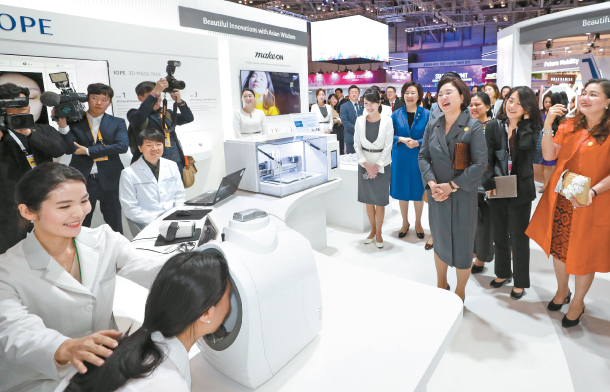 Korea’s first lady Kim Jung-sook and other first ladies of Asean countries watch a beauty treatment demonstration at Amorepacific’s booth at the K-beauty festival held at the Busan Exhibition and Convention Center in Busan on Tuesday. [YONAHP]

During the special summit between Korea and Asean, a K-beauty festival took place on Monday and Tuesday at the Busan Exhibition and Convention Center, known as Bexco.

President Moon Jae-in has been a strong supporter of the K-beauty industry. When he received a routine briefing from Economic Deputy Prime Minister Hong Nam-ki on Nov. 14, Moon asked the government to pay special attention to the industry. “The cosmetics products market is an important axis in the bio industry,” Moon said at the time, asking the government to come up with plans to further assist the industry.

“The market in China is already saturated,” a Blue House official said. “We believe the event [attended by Kim and the Asean first ladies] will contribute to creating more opportunities for Korean companies to enter the Asean markets.”

Products from small- and medium-sized companies were featured in one section, and another section featured products resulting from Korea-Asean cooperation.

Kim and the first ladies spent the most time in a third section, which featured products from Amorepacific. President Bae Dong-hyun of Amorepacific hosted a presentation about the company’s brands and products, and Park Won-seok, a senior researcher of Amorepacific’s Research Institute, explained to them about various cosmetics technologies, such as a program to diagnose skin conditions and facial masks using 3-D printing.

According to SME Minister Park, the first ladies enthusiastically participated in the event. They tested various products, and some of them visited the festival in advance on Monday.

Naraporn Chan-o-cha, first lady of Thailand, said Tuesday Korean beauty products are very popular in her country because Korean TV shows such as “Daejanggeum,” also known as Jewel in the Palace, are highly popular.

Minister Park also said she was impressed by the strong interest in K-beauty products expressed by Siti Hasmah, first lady of Malaysia.