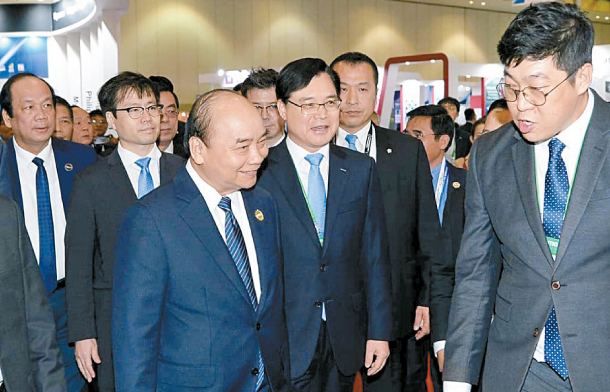 BUSAN - Companies, investors and trade delegations were busy on the sidelines of the Asean-Republic of Korea Commemorative Summit, working together as they searched over the past two days for new business opportunities across the region.

Asean as a trade bloc has steadily grown as Korea’s third-largest overseas investment destination at $6.1 billion after the United States and China. That compares to around $2 billion in investment in the region in 2009.

The Korea Trade-Investment Promotion Agency (Kotra) hosted the Invest Asean event with the 10 Asean members setting up shop at the Busan Exhibition and Convention Center, or Bexco, to explain investment and business opportunities for Korean firms.

Around a thousand companies call Sembcorp’s industrial parks home, with the corporation acquiring $45 billion in investment over the past 22 years. According to a Sembcorp official at the booth, 100 Korean companies have already entered its industrial parks.

The Laos booth showcased its Savan Park, a joint commercial, industrial and logistics complex jointly created between the Laos government and Malaysia’s Pacifica Streams Development. There are currently 68 companies that have invested in the park, including one Korean company and one joint venture between Korea and Laos.

Thailand displayed its smart visa program that is designed to attract skilled workers and investors who will be granted up to four years of stay and be exempted from a work permit.

The country aims to draw in experts in next-generation vehicles, automation and robotics, aviation and logistics and others.

Vietnam, Korea’s largest trade partner among the Asean members, provided information on incentives for import tariffs such as a five-year tariff exemption for imports used for manufacturing projects in less developed regions of the country.

Meanwhile, the Philippines is working to draw in investment for its tourism infrastructure, such as a water supply distribution and sewage system in San Vicente in Palawan and resorts in Bohol.

The Multilateral Development Bank Project Plaza, also hosted by Kotra, was abuzz with trade officials and companies discussing new opportunities through funding from global banks such as the Asian Development Bank.

The event looked beyond the Asean borders and into other development projects such as in Nepal.

Keshab Kumar Sharma, director-general of the department of roads under Nepal’s Ministry of Physical Infrastructure and Transport, was present at the event, hoping to drum up more involvement from Korean companies in infrastructure projects in Nepal.

“We now have four direct flights a week between Kathmandu, [Nepal], and Incheon. Many Korean companies are coming here for consulting and design. We hope for more actual construction companies.”

Sharma explained that Nepal is currently planning to build more than 1,000 kilometers (621 miles) of expressways and 500 kilometers of railroads in the next five years. He explained that Chinese companies have largely been in charge of actual construction.

He added that there are growing hopes for Korean companies to build a metro system in Nepal’s capital Kathmandu, considering that it was a Korean company that conducted a feasibility study for the project.

“There are already a lot of Korean companies [in Nepal] but still we can expand the scope,” Sharma explained, citing infrastructure projects beyond transportation. “Korean companies can come to Nepal and develop hydro power.”

“Instead of Korean companies competing against one another, we should cooperate and create synergy with one another,” explained an official at a Korean engineering company currently working on a project in Nepal. “Japanese companies are very good at doing so. We could make more progress if we do the same.”