President Moon Jae-in and Asean leaders watch a demonstration of Samsung Electronics’ smart home robot at the Asean-Republic of Korea Innovation Showcase on Tuesday at the Busan Exhibition and Convention Center. [YONHAP]

BUSAN - Touting everything from electric auto rickshaws to automated factory technology, 45 Korean companies gathered at the Busan Exhibition and Convention Center to display the products they hope to take to Southeast Asia on the sidelines of the Asean-Republic of Korea Commemorative Summit.

Industry giants and up-and-coming firms alike showed off the products they hope will cement their place in the Asean market at the Asean-Republic of Korea Innovation Showcase hosted by the Korea Trade-Investment Promotion Agency.

The system is part of Pyeongtaek, Gyeonggi-based Telstar-Hommel’s artificial intelligence (AI) smart factory solution, LINK5, which can remotely control automated factory lines even if controlled from hundreds of miles away.

The company, which mainly focuses on manufacturing machinery and auto parts for clients including Hyundai Motor, demonstrated the remote control of its manufacturing plant in Gyeongju, North Gyeongsang, on the spot, halting a giant robotic arm visible through a live video stream.

While the LINK5’s commercialization is in its early stages and the company is currently targeting Korean companies, Telstar hopes to deploy the system to Asean members in the future.

Thai Prime Minister Prayut Chan-o-cha expressed interest in deploying the technology in Thailand during a tour of the company’s booth on Tuesday, according to Telstar-Hommel.

The company is also working with telecom giant KT to use its 5G network and cloud system to boost the service’s speed and security and is also working on developing digital twin technology that will digitalize all aspects of factories so that they can be monitored and managed more thoroughly.

Samsung introduced its smart home appliances - including a smart robot that works in the kitchen - to the Asean leaders and President Moon Jae-in.

The company has set up a joint venture with local companies in Laos and plans to introduce the eco-friendly vehicles and start replacing existing environment-polluting auto rickshaws from its roads in May next year.

“Laos has a lot of hydroelectric power,” explained Choi Seong-ho, a managing director at Kyungwoo. “Electric vehicles are ideal for the country.”

The company hopes to not only introduce the vehicles but also supply batteries and mobility platforms such as ride-hailing and ride-sharing services in the future.

During the Innovation Showcase event, some of the Asean first ladies rode on Kyungwoo’s electric shuttle vehicle.

In the Smart Farming section of the event, Sherpa Space showed off its tunable, full-spectrum lighting system that provides the ideal conditions for plants to grow and changes and adapts through different stages of the life cycle.

The company aims to boost not only productivity, but also quality, such as increasing the level of vitamin C in strawberries.

The start-up, established in October 2016, is already an honoree in the CES Innovation Awards for next year.

According to its president Yun Choa-mun, the company has signed a memorandum of agreement with a university in Indonesia to test out its lighting in container farms to grow strawberries, which are a difficult crop to grow in the Southeast Asian climate.

It is not only targeting Asean markets, but also the United States. The company hopes to enter the U.S. market in January next year. 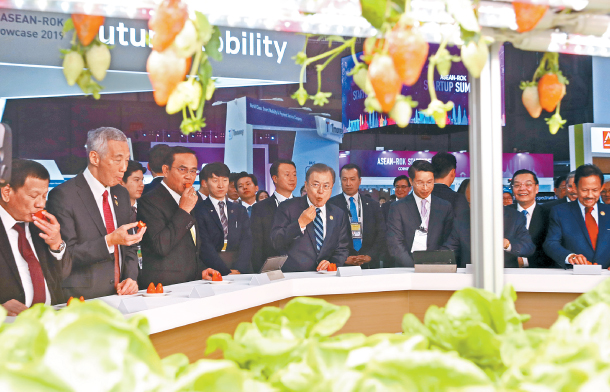 President Moon Jae-in and Asean leaders taste strawberries that were grown using smart farming technology at the Asean-Republic of Korea Innovation Showcase on Tuesday at the Busan Exhibition and Convention Center. [YONHAP]

Start-ups played a big role at the summit, with President Moon emphasizing their importance in jump-starting industries.

Moon expressed his hope for a consolidated start-up policy between Asean and Korea on Tuesday at the Asean-Republic of Korea Startup Summit.

“It is important for cooperation between countries in start-up policy,” said Moon. “The 11 countries of Asean and Korea need to come together and create a start-up environment.”

“We will jointly establish a start-up road map in order to let investors know about start-up policies and information and establish a network for joint investment,” promised Moon.

Start-ups from Asean and Korea were present at the event, including Krafton, the company behind video game PlayerUnknown’s Battlegrounds, online retail giant Coupang and Indonesia’s AI drone company Aerodyne.

Korea’s Minister of SMEs and Startups Park Young-sun was upstaged by a so-called deepfake - a portmanteau of deep learning and fake - made using AI technology at the Startup Expo on Monday.

The fake minister, introducing herself as “AI Park Young-sun,” called on companies to embrace AI technology, emphasizing its potential through services such as AI-based ordering systems and automated factory manufacturing.

Local AI start-up Moneybrain pieced together existing footage of the minister to create the video.

The government is hosting another start-up expo until Friday at the Dongdaemun Design Plaza in central Seoul.

Considering its efforts to establish high-tech infrastructure in Sejong and Busan such as an automated vacuum waste collection system, Korea is eyeing Asean’s infrastructure market as the region will require new investment of around $7 trillion in new urban infrastructure by 2035, according to the United Nations Environment Programme.

Asean countries reached urbanization at 48 percent in 2017 and have vowed to continue to build more advanced infrastructure, including 26 smart cities in the region.

Asean is already Korea’s top market for overseas infrastructure orders, at $11.9 billion as of last year.

Korea’s efforts to showcase its smart city infrastructure technology bore fruit on Monday as the government signed a memorandum of understanding with Indonesia to help its plans to develop a new capital city.

Under the agreement, the two countries will exchange technology surrounding urban planning and development as well as infrastructure and housing construction.

According to the Korean Land Ministry, Indonesia’s capital city relocation project is estimated to cost around 40 trillion won ($34 billion) and aims to establish the city in the Kalimantan region of the island of Borneo by 2024.

The current capital city of Jakarta struggles with overpopulation and faces risks from rising sea levels.

The Korean Land Ministry said it would provide its experience establishing new cities such as Korea’s administrative capital of Sejong. It added that it would also focus on sharing its experience to establish a water management system, considering Indonesia’s shortage of such infrastructure.