More women go back to work after marriage

More women go back to work after marriage 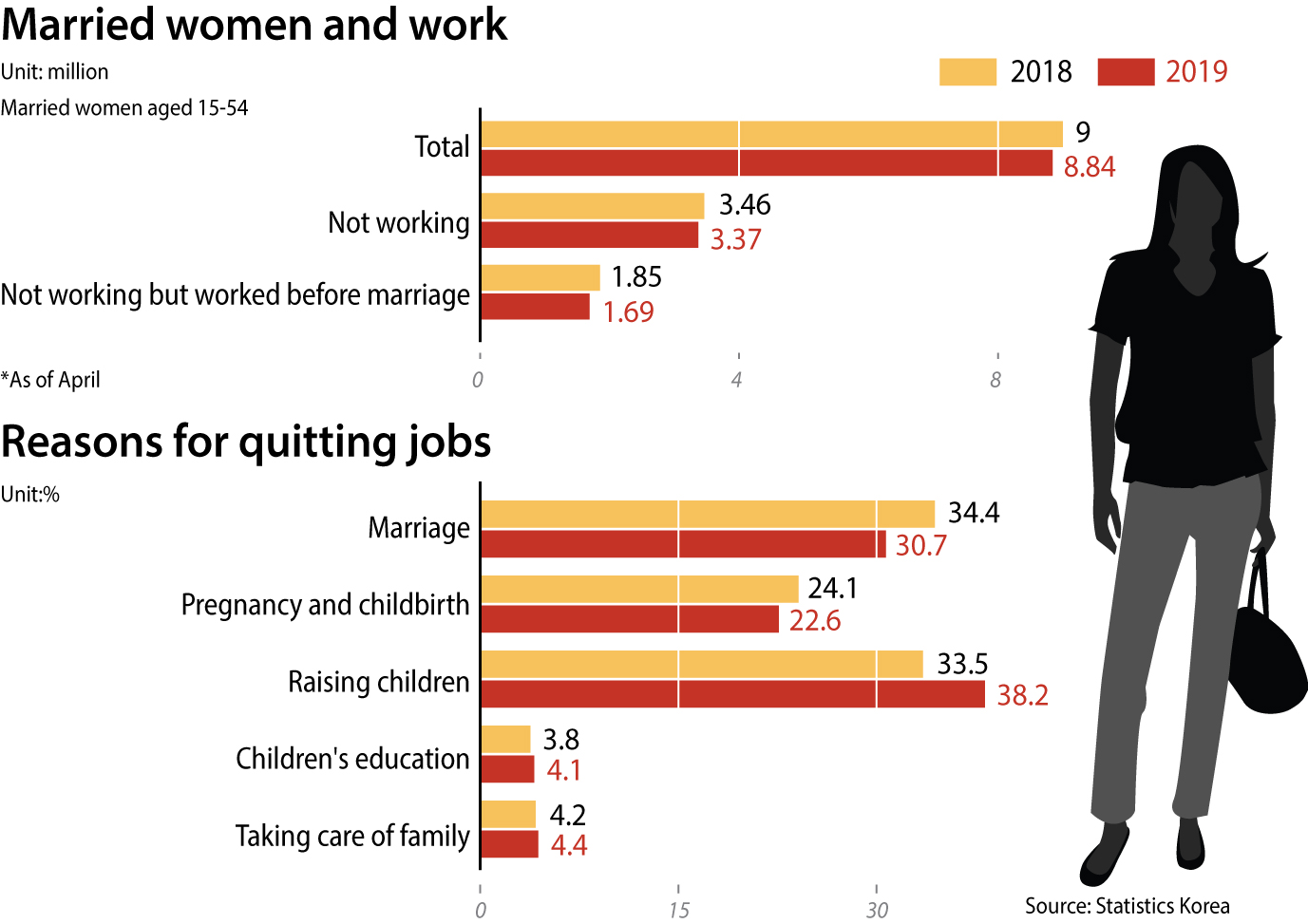 According to a study by Statistics Korea released Tuesday, 8.84 million women 15 to 54 are married, and of those, nearly 1.7 million used to have a career and are now staying at home.

The ratio of women not working to the total number of married women in that age group is 19.2 percent, a 1.3 percentage point drop from last year.

“We believe that women who ended their careers short are landing jobs, while the number completely giving up on finding jobs are shrinking amid the job market becoming more active than last year,” said Chung Dong-wook, the statistics agency’s director on employment data.

In recent years, women cutting their careers short to raise a family has become a much discussed social issue. It was the subject of the novel “Kim Ji-young, Born 1982,” which became a movie of the same name.

The Moon Jae-in government has encouraged married women to return to work through official policy, including government subsidies for childcare and expanding paid-leave for husbands.

In July, the Finance Ministry proposed a tax reform bill offering a 70-percent tax deduction for women getting a job after a break of three years or more, while the companies rehiring these women will get a 30 percent tax credit on labor expenses for two years. The tax policy will be available through the end of next year.

While the government emphasizes policies that reduce the number of women who stay home after cutting their careers short, the same study has found that fewer women in the age group in question are married.

The study found that women living in rural areas are more likely to remain as stay-at-home wives or mothers.

In Seoul, the number of women unemployed fell 2.7 percent compared to the previous year.

The number of women staying at home despite previously having a career fell 7.9 percent.

In the case of Busan, the number of married women without work declined 9 percent, while those with past career experience shrunk 14.2 percent.

The greatest increase in the number of married women with no jobs was in Sejong, with a 4.4 percent rise. The number of women with past careers now staying at home grew 9 percent.

“In the case of Sejong, where there’s a large group of public servants, many of the households are single-income,” said the Statistics Korea director Chung. “Additionally, there are fewer women that stay at homes in the cities as it is much easier to find jobs in urban areas.”

This year, the biggest reasons for quitting jobs were the raising of children, marriage, pregnancy and childbirth. Last year, marriage was the No.1 reason for women quitting their jobs.