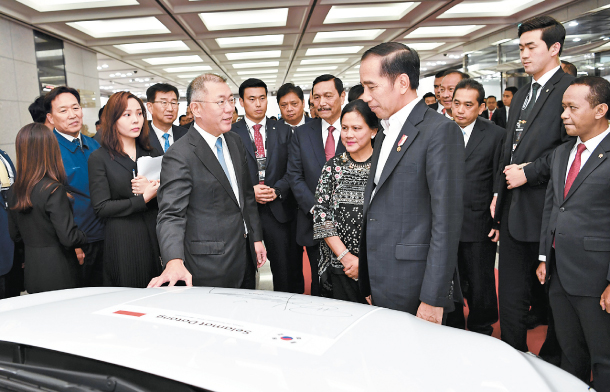 Hyundai Motor inked an investment deal worth $1.55 billion to build a manufacturing factory in Indonesia, with an aim of turning the new facility into an important production hub for emerging Asian countries.

The move came as the automobile company pivots from China toward the fast-growing Southeast Asian market including Indonesia, Vietnam and Thailand, the markets traditionally considered the stronghold of Japanese car makers.

Located in Bekasi, West Java, the plant will come into operation by the end of 2021 with a designated annual capacity of 150,000 vehicles after starting construction in December.

“The total investment will be $1.55 billion by 2030 to cover production development and operation of the factory, and the factory will be built on 776,000 square meters [192 acres] of land,” the company said in a statement.

The major models to be produced there include small SUVs, multi-purpose vehicles and potentially electric vehicles tailored for the Asean market.

The built units will be shipped to Southeast Asian nations such as Vietnam, the Philippines and Thailand as the exports to those countries will be exempt from tariffs based on the Asean Free Trade Area agreement.

Hyundai Motor expects the production line to benefit from a Comprehensive Economic Partnership Agreement signed between Korea and Indonesia yesterday, which will eliminate the majority of tariff barriers.

“The agreement has eliminated tariffs on steel used in cars and auto parts and will likely contribute to boosting exports and favorable business conditions in Indonesia,” the company said in a statement.

The decision is in line with a series of strategic investments and establishment of plants in Asia.

Hyundai Motor signed a memorandum of understanding with Vietnam’s Thanh Cong Group earlier this year to set up a joint sales venture company after setting up a factory to produce cars in a completely knocked-down format.

As a part of strengthening its presence in the region, Hyundai Motor will bolster the existing partnership with Grab, a ride-hailing transportation service provider that grew in popularity in Southeast Asia.

Euisun Chung, executive vice chairman of Hyundai Motor Group, indicated that the construction could cater to electric vehicles, expressing his intention to work hand in hand with the Indonesian government’s eco-friendly policies.

Chung and Lee Won-hee, president and CEO of Hyundai Motor Company, appeared at a ceremony celebrating the deal in Ulsan.