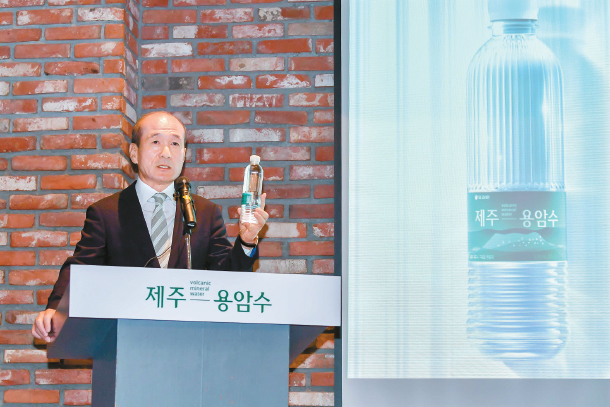 The maker of the iconic Choco Pie is now bringing you Jeju volcanic mineral water, and with its introduction is undergoing a seismic transformation.

Orion said during a press even Tuesday that it will begin selling the new beverage from Sunday.

The bottled water, filtered through Jeju basalt, is a premium water product that offers higher levels of calcium, magnesium and potassium than waters from domestic rivals, according to Orion.

“Orion’s Jeju volcanic mineral water isn’t just a new release, but has very special meaning to the company in that it demonstrates our transformation from a confectionery firm into a general food company,” said vice chairman Hur Ihn-chul at the press event, which held in Gangnam, southern Seoul, on Tuesday.

The company said it will export the water to China and Vietnam next year, with plans to expand further abroad in the near future.

“Our basic stance for overseas expansion is to promote it as premium water,” said Shin Duck-kyun, general manager of the new business division at Orion. He added that pricing will be at about the same level as Evian, the high-end French water.

Orion believes its distribution networks established in China and Vietnam will help its water business. The company has already signed a contract with Luckin Coffee, one of China’s largest chains of coffee shops.

“Luckin Coffee is the second largest franchise cafe in China after Starbucks. It has 3,700 stores in China. We signed a deal with Luckin Coffee in October to supply water at the franchise cafes starting next year to be sold alongside Evian and Perrier,” said Kim.

Orion’s goal is to become one of the top three bottled water producers in Korea.

Orion will offer an app where users can place orders to get the bottled water delivered. Similar to the services provided by online retail operators like Coupang and Market Kurly, Orion said app users can get water delivered the next day.

“For manufacturer like us, the cost for distribution is very high, which raises the consumer price of the product. So our goal is to save that cost and advertisement cost to offer more benefits to consumers,” said Shin.