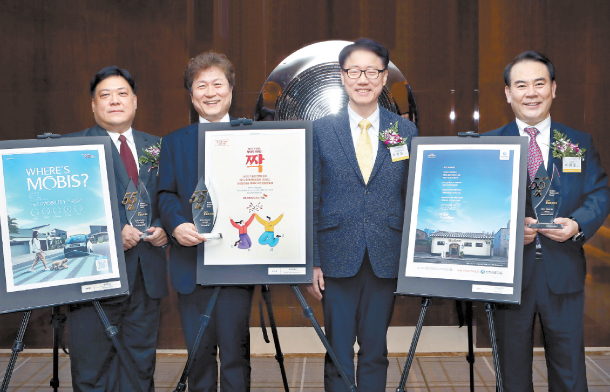 In its 55th year, the JoongAng Advertising Awards selects the best print ads published in the Korea JoongAng Daily, JoongAng Ilbo and JoongAng Sunday. The results are based on assessments from a group of five judges, all senior executives at local ad agencies, and a reader survey. This year, 12,803 readers participated in the online survey.

A total of 23 awards were given by the three publications. The Korea JoongAng Daily gave its grand prize to SK Holdings. Hyundai Mobis took away the platinum prize while Shinhan Financial Group won the gold.

SK Holdings was recognized for its “SK’s social value is Jjak” ad. The print ad was one of the conglomerate’s series “Our social value in one word.” In Korean, the word jjak means partner but is also onomatopoeic for clapping.

“Our main direction in creating social value is to look for ways companies can join forces with the public to solve problems in society,” Hong Kyung-pyo, SK Holdings’ vice president for brand management, told the Korea JoongAng Daily.

“A motivation behind the ‘one word’ series is that a lot of people misunderstand the concept of social value, equating it to corporate responsibility or simple donations. We wanted to represent that in a simpler way,” he added.

The platinum prize went to Hyundai Mobis, Hyundai Motor Group’s component affiliate. This year, the company ran the “Mobility for tomorrow” campaign in video and print. It presents the journey of a dog named Terry that sets out to find his owner in Hyundai’s self-driving car, M.Vision. The video has received more than 10 million views on YouTube in two months.

“The ad’s main purpose was to show how autonomous cars can change the world and how emotionally warm and friendly that world could be for us humans,” said Hyundai Mobis Vice President Park Jin-ho, who heads the public relations division.

Shinhan Financial Group took away the gold prize for the second year in a row. While the company was awarded for a corporate social responsibility campaign to help people in need last year, this year it was its “Hope Together” campaign that commemorated a historical event: the 100th anniversary of the provisional government of Korea.

For a month between mid-June and July, Shinhan set up the Independence Restaurant in Jongno District, central Seoul, to serve food favored by independence activists that fought in and outside Korea. The location attracted more than 6,000 people.

“The reaction was great - we didn’t put out many ads, but the visitors did the job for us,” said Shinhan’s Deputy President Lee Byeong-cheol in charge of public relations. “Our goal was to fulfill our role as a company with social responsibility. In this campaign, we made the food eaten by our independence activists so that people can experience those times.”

Part of the restaurant’s revenue was donated to independent activists’ families.