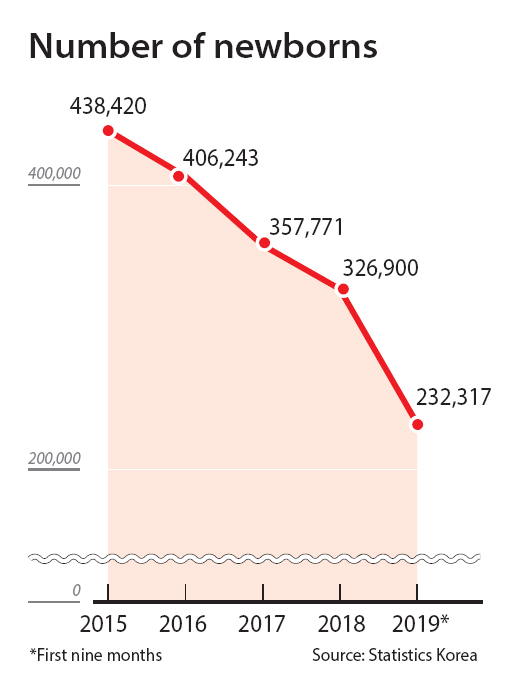 Births hit a record low in the third quarter deepening concerns about the shrinking population.

On a monthly basis, births have hit their 42nd consecutive low.

According to Statistics Korea on Wednesday, in the third quarter, 73,793 newborns were delivered, which is an 8.3 percent drop, or 6,687 fewer, than the same period a year earlier. It is the smallest number of births since the data were first compiled in 1981.

The previous record low was hit in the fourth quarter of last year, when 74,542 newborns were delivered.

The total fertility rate of women aged between 15 and 49 has further dropped, to a record 0.88 from the previous record in the second quarter of 0.98.

If the total number fails to reach 300,000 by the end of this year, it would indicate a rapid decline considering that the number of newborns fell below 400,000 just two years ago.

“The number of newborns in the fourth quarter usually shrinks [compared to the previous quarters],” said Kim Jin, director of population census at Statistics Korea.

The shrinking population has become a major issue in recent years as it could threaten long-term economic growth.

The statistics agency estimates the working-age population will likely fall to 17 million, about half the 37.5 million last year, by 2060.

During the National Assembly’s annual audit last month, statistics agency commissioner Kang Shin-wook cited young people avoiding marriage and pregnancy even if they do get married.

The number of people that were married in September increased, but in the first nine months, the total actually dipped 0.9 percent compared to the previous year.