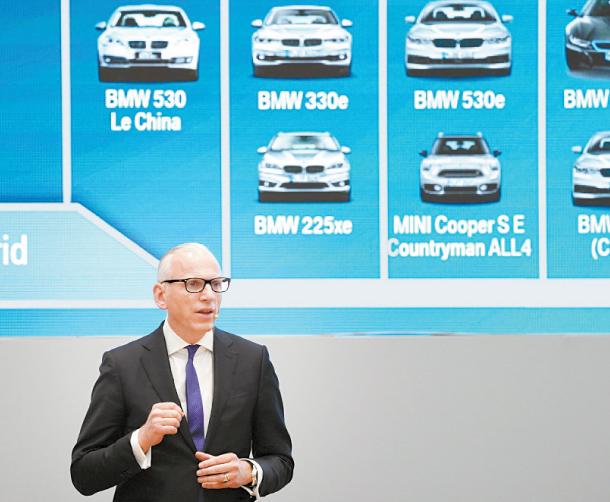 Pieter Nota, BMW board member responsible for customer, brands and sales, delivers a speech during a press conference held at the carmaker’s driving center in Incheon on Wednesday. [BMW GROUP KOREA]

YEONGJONGDO, Incheon - BMW Group will unveil its new 5 Series at the Busan International Motor Show in a worldwide debut next year, a decision that its board members say is in line with the German automaker’s focus on Korea as a strategic target market.

Two executives from BMW - Pieter Nota, BMW’s board member responsible for customer, brands and sales segments, and Nicolas Peter, the unit’s chief financial officer - vowed to keep on expanding its investment into research and development (R&D) in Korea Wednesday as the car maker still grapples with the tainted reputation in the aftermath of the engine fire scandal.

The current R&D center located in Yeongjongdo, Incheon, will be relocated to a larger facility next year with 13 more employees, the executives said in a press conference held at BMW’s driving center near the R&D center.

“We recognize Korea as one of the world’s powerhouses of high-end technology. It represents innovative thinking, technological progress and tremendous openness to new developments,” said Peter. “This places Korea in an excellent position to play an important role in shaping future mobility.”

As for electric cars, the Mini Electric, the fully electric version of the Mini, will be introduced to Korean drivers alongside other electric vehicles.

Earlier this month, the group said that it plans to have 25 electric models in its portfolio by 2023, with more than half of those being fully electric cars.

Another focus will be on partnerships with local companies.

The executives highlighted that recent deals and agreements with Korean companies show its commitment to the market.

The automaker will partner with SK Telecom to jointly develop car navigation solutions.

BMW Group is expected to spend over 2 billion euros on Korean parts by the end of next year, the Korean unit of the German auto giant said during a meeting with its local suppliers last week.