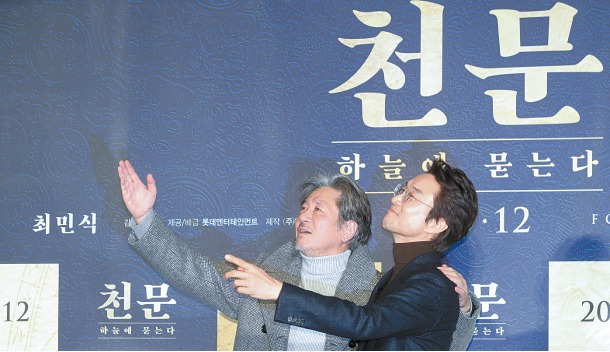 Actors Choi Min-sik, left, and Han Seok-kyu pose for the camera at the press conference of their upcoming film “Forbidden Dream” at Lotte Cinema Konkuk University Entrance branch in eastern Seoul on Wednesday. The film is scheduled to be released next month. [YONHAP]

Jang Yeong-sil is remembered today as the ingenious inventor of the Joseon Dynasty (1392-1910) who revolutionized the Joseon court despite his humble birth.

Jang’s achievements were possible because King Sejong the Great (1397-1450) valued talent above class hierarchy, promoting Jang to Chief Royal Engineer at a time when social position meant everything. Jang, who was born a peasant, went on to hold a position that would have been completely unobtainable under virtually any other king.

Although Jang’s creations are recorded in the Annals of the Joseon Dynasty, the official records write Jang off after March 1442, when he was blamed for a sedan chair that broke when King Sejong was traveling.

“[In the records,] the relationship between the two was described as very close, more than a mere subject being loyal to his king,” said director Hur Jin-ho at a press conference for his upcoming film “Forbidden Dream” on Wednesday. “[Regardless of the class,] they were comrades, friends who dreamed the same dream [to advance the country’s technology forward] but due to that mistake, Jang is ordered to be flogged and suddenly disappears from history.

“King Sejong has never abandoned his talented subjects,” Hur continued. “No matter what fault they had, he would always work it out with his subjects. So I was curious about Jang, who abruptly disappears from history. I wondered what happened to their bond that was once so close.”

Veteran stars Han Seok-kyu and Choi Min-sik portray King Sejong and Jang in the new movie. Han has previously appeared as the king in the SBS historical drama series “Tree with Deep Roots” (2011). While he was playing the king then, Han said that he has always speculated that “if the king had a partner, a true friend, then I thought it would be Jang.”

Choi was eager to take on the role because nobody else has ever really taken a close look at their friendship. The actor relished the chance to explore their friendship from a different perspective.

“I wasn’t actually that interested in what sort of deeds the two had done,” said Choi. “It was their interaction that attracted me. I once read in a book that Jang had personally ‘sucked out King Sejong’s bedsore with his lips,’ and thought, ‘Wow, this is no ordinary friendship.’”

Choi let his imagination run wild while thinking what the two must have really been like when they were together.

“I thought they could have spent many sleepless nights just talking about their interests, such as astronomy,” Choi said. “But I also wondered if their relationship could always remain cordial - I mean, each of them could have forgotten their status and maybe [Jang] could have disrespected the King in a way because they were so close.”

Like their characters, the two actors also go way back, as they have known each other since attending university together. Although the two actors are known to be close friends in real life, this film will be their first time appearing on the screen together since they featured in the film “Swiri” in 1998.

Han said that their friendship was similar to that of their characters and expressed gratitude for having the opportunity to work with Choi again.

“It came down to this,” Han said. “Although we may not have been in the same film or drama after ‘Swiri,’ we were always going down a similar path as two people dreaming the same dream - to act, and to do it well. I was truly happy to have worked with my friend.”