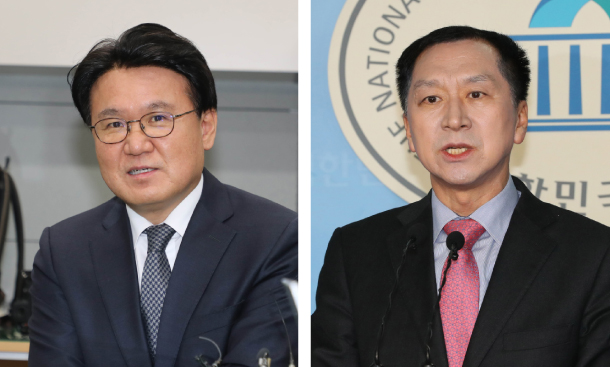 Daejeon’s police chief Wednesday denied accusations he received orders from the Moon Jae-in Blue House last year to investigate the main opposition Liberty Korea Party’s (LKP) candidate for Ulsan mayor shortly before the election in order to sway public opinion against him, saying he would “welcome” a probe from prosecutors if they decide to launch one.

The remarks came amid local news reports that prosecutors in the Seoul Central District Prosecutors’ Office have recently begun reviewing documents from the Ulsan prosecution about complaints filed against the Daejeon police chief, Hwang Un-ha.

The complaints against Hwang were first filed by the LKP in March, nearly a year after Hwang launched an investigation into the LKP’s Ulsan mayoral candidate when he was Ulsan's police chief.

The LKP accused Hwang of violating election laws and abusing his official authority, but the case never managed to pick up momentum with the prosecution - until recently.

Ulsan prosecutors announced Tuesday that they referred Hwang’s case to the Seoul Central District Prosecutors’ Office because “most people” related to the case were in Seoul. Seoul prosecutors were speculated to have started their review of the case later that same day.

Ulsan’s mayoral election was held in June 2018, and the seat eventually went to Song Cheol-ho, a former labor rights lawyer, who was nominated by the ruling Democratic Party. Song is known to be a strong supporter of Moon.

Song faced off against Kim Gi-hyeon, who was nominated by the LKP for a second term. Kim served as Ulsan’s mayor from July 2014 to June 2018.

Hwang has applied for early retirement in order to run in next year’s general election for a seat in the National Assembly, representing Daejeon. Seoul prosecutors will mainly be tasked with figuring out whether the Moon Blue House really passed on information about Kim to Hwang and ordered Hwang to investigate him before the mayoral election. If the allegations prove to be true, it could mean Hwang abused his official police authority and violated the Public Official Election Law, which prohibits public officials from interfering in political events.

On the part of the Blue House, if Hwang’s tip-off was sourced from the presidential office’s special inspection bureau, that could mean the bureau also violated the Independent Inspector General Act by investigating someone they’re not supposed to.

Article 5 of the act stipulates that persons subject to inspection are the spouse and relatives of the president within the fourth-degree of consanguinity as well as public officials who are senior secretaries of the president, or higher.

The Blue House special inspection bureau was led by scandal-plagued Cho Kuk when Hwang investigated Kim. Cho, at the time, was President Moon’s senior secretary for civil affairs. Hwang on numerous occasions denied receiving any personal orders from the Blue House and said he does not know where the tip-off originally came from.

Kim, the former Ulsan mayor who lost a second term, claimed Wednesday that Moon, Cho and current Ulsan Mayor Song were extremely close to each other, and that it was only “common sense” that Moon teamed up with Cho to make Song the mayor. Kim said there was “a widespread rumor” that Hwang investigated Kim and his aides after the Blue House promised Hwang a seat in the 2020 general election.

In March 2018, Ulsan police launched a probe into Kim’s younger sibling and Kim’s chief secretary on allegations they interfered in construction deals. The police referred the cases to the prosecution, but Ulsan prosecutors cleared them of their charges in March this year. The LKP then field the complaints against Hwang with prosecutors, accusing him of meddling in the election.