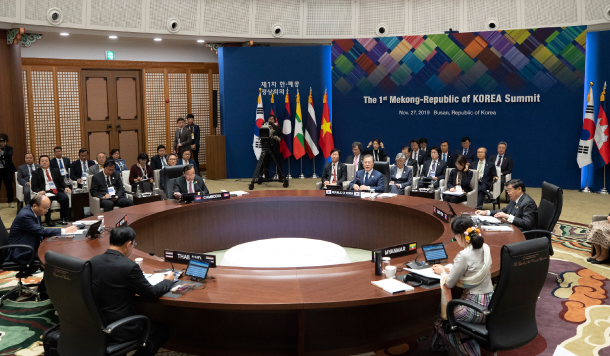 President Moon Jae-in and leaders of five countries along the Mekong River attend the main session of the 1st Mekong-Republic of Korea Summit held at the Nurimaru APEC House in Busan on Wednesday. [YONHAP]

BUSAN - President Moon Jae-in and leaders of five countries along the Mekong River adopted a joint declaration after their summit on Wednesday to promote their partnership for people, prosperity and peace.

Moon and Thai Prime Minister Prayut Chan-o-cha co-chaired the summit, the first of its kind held in association with the Korea-Asean special summit. Since 2011, a ministerial-level conference has been held annually between Korea and Mekong countries, but this meeting was elevated to a summit of state heads for the first time this year.

In his opening statement, Moon noted the importance of Mekong countries for Korea. “Korea-Mekong trade was $84.5 billion last year, up by 2.4 times over the past eight years. Investment went up by 1.7 times to reach $3.8 billion,” Moon said. “People’s exchanges tripled to reach 7 million. The Mekong region is a key development and cooperation partner of Korea, where more than 20 percent of Korea’s official development assistance fund is spent.”

At the summit, Moon also stressed that the Mekong countries are key partners for his New Southern Policy, aimed at more actively engaging Southeast Asian nations, the Blue House said.

First, Korea and Mekong countries will share experiences and work together for mutual prosperity, Moon said, announcing that public research institutes modeled after the Korea Development Institute and the Korea Institute of Science and Technology will be built in the five countries. Cooperative projects to counter the fourth industrial revolution were also agreed upon, Moon said.

Third, Korea and the Mekong nations will create an East Asian community centered on people, peace and prosperity, Moon said. Participating leaders agreed to designate 2021 as the Korea-Mekong Exchange Year, Moon said, adding that Korea will participate more actively on infrastructure projects to increase connectivity in the region.

“Mekong leaders agreed that peace and stability of the Korean Peninsula is crucial for the co-prosperity of Korea and the region,” Moon said. “I shared the vision of creating an international peace zone inside the demilitarized zone, and we agreed to work together for complete denuclearization and permanent peace of the Korean Peninsula.”

As a result of the summit, Korea and Mekong countries adopted a declaration that will be used as a road map to further improve their ties. The “Mekong-Han River Declaration for Establishing Partnership for People, Prosperity and Peace” will be a milestone to expand the two sides’ economic cooperation to other areas, Moon said.

According to the declaration, the leaders agreed to continue their cooperation based on the concepts of “people, prosperity and peace,” which are key in Moon’s New Southern Policy. They also agreed to seven new priority areas of cooperation.

The Blue House said the Korea-Mekong summit has created a consensus among the participating leaders to expand their cooperation. Moon was able to discuss specific cooperation projects with the five leaders and established a basis for mutual prosperity in the future, it said.

According to the Blue House, expectations are high for more business opportunities between Korea and the five countries, as the Korea-Mekong Entrepreneurs Council will be established following the summit. The Korea International Trade Association and six business lobbies from the five countries will join the council.

Korea and the five countries will work together to hold a routine summit on the sidelines of Asean-related events in order to continue their cooperation, the Blue House said.

“Based on the statements on outcomes of the special summits and the Asean countries’ trust of our New Southern Policy, we will strongly push forward cooperation in the coming 30 years,” said Joo Hyung-chul, economic adviser to Moon. “We will listen to various opinions of Asean governments, companies, experts and people, upgrade the policy to New Southern Policy 2.0 and implement it starting 2021.”

Moon wrapped up his four-day visit to Busan with the joint press conference after the Korea-Mekong summit. He headed to Seoul and had a bilateral summit with Vietnamese Prime Minister Nguyen Xuan Phuc later in the evening.

Moon is scheduled to have a bilateral summit with Malaysian Prime Minister Mahathir Mohamad today at the Blue House to complete his diplomacy marking Korea’s 30-year ties with Asean.