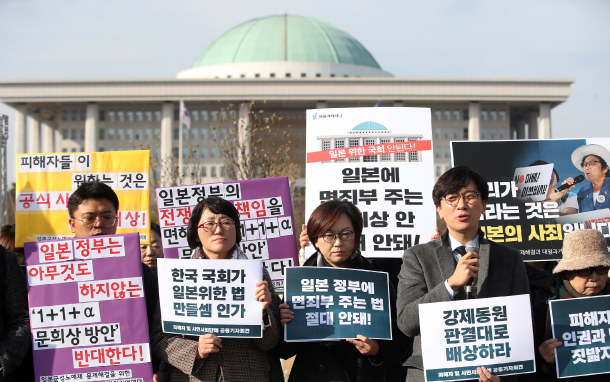 Civic groups and victims of forced labor and sexual slavery hold a press conference in front of the National Assembly in Yeouido, western Seoul, on Wednesday, protesting the Moon Hee-sang bill attempting to resolve the forced labor compensation issue, saying it ignores the essence of the Korean Supreme Court rulings last year. [NEWS1]

Forced labor victims involved in the Mitsubishi Heavy Industries case and activists supporting their cause called on the Korean government to play a responsible role in a press conference held at the Gwangju Metropolitan Council Wednesday morning, demanding the proper implementation of last year’s Korean Supreme Court ruling.

Moon’s draft bill, the so-called two-plus-two plan, calls to raise 300 billion won ($255 million) from contributions by the Korean and Japanese governments and companies and the general public to establish a foundation to compensate up to 1,500 Korean forced labor victims. This plan is modeled after Germany’s Foundation Remembrance, Responsibility and Future organization to compensate Nazi-era forced laborers and is an attempt to resolve the friction resulting from the wartime forced labor issue between Seoul and Tokyo which has resulted in a trade spat and deterioration in bilateral ties.

A statement by the civic group said, “One year after the Supreme Court decision on the forced labor issue, the compulsory execution procedure in Japan has taken place. We express concern that our government views the forced labor victims as the source of Korea-Japan tensions.”

They stressed that the plaintiffs are “the victims in history” calling to restore their rights and dignity in the process.

The Korean Supreme Court made landmark rulings on Oct. 30 and Nov. 29 last year, ordering Nippon Steel and Mitsubishi Heavy Industries to individually compensate Korean victims of forced labor during World War II, recognizing the illegality of Japanese colonial rule. Tokyo protested the decisions, Japanese companies refused to comply, and the victims in turn began the legal process to seize and liquidate the companies’ assets in Korea. Relations between the two countries have soured as Japan implemented export controls on Korea and demanded a resolution to the forced labor issue, which it claims was solved with the 1965 bilateral claims agreement.

Yang Geum-deok, 89, an elderly survivor of forced labor who filed a suit against Mitsubishi with a group of other female victims, lamented during the press conference, “I won’t accept money given in contempt of Korea. Japan should put a hand on its heart and apologize if it has a conscience.”

The victims’ legal representatives expressed concern that the Moon Hee-sang plan only focuses on the compensation aspect and does not include an official apology from Japan nor vindicate the pain of the forced laborers.

Moon’s current plan proposes that the Japanese government makes a contribution of 600 million yen ($5.5 million), accounting for the amount left over from the 1 billion yen Japan paid for the so-called comfort women deal reached in 2015 after the Tokyo-funded Reconciliation and Healing Foundation was formally dissolved this year. Korea and Japan signed a bilateral agreement in December 2015 to settle the issue of wartime sexual enslavement of girls and young women during Japanese colonial rule (1910-45).

It is an evolution of the one-plus-one plan, initially proposed by the Korean Foreign Ministry in June which called for a fund comprised of voluntary contributions from both Korean and Japanese companies. This plan was immediately rejected by Japan, but various iterations of the one-plus-one proposal have been considered since. Moon earlier this month in a lecture at Waseda University Tokyo floated a plan to establish a fund comprised of contributions by the two countries’ companies and general public.

Civic groups and victims of forced labor and sexual slavery also gathered in front of the National Assembly in Yeouido, western Seoul, Wednesday afternoon, holding a press conference strongly protesting the Moon Hee-sang proposal and calling it “problematic.” They demanded a halt to the proposed bill’s enactment process.

Speaker Moon on Wednesday received a letter of protest over his proposed bill from civic group leaders supporting the forced labor victims, while another group of some 35 victims and family members submitted a petition in support of the bill.

Japanese Prime Minister Shinzo Abe indicated some support of the so-called Moon Hee-sang bill and ordered his aides to share information with the Korean Embassy on this, according to a Japanese report. The Mainichi Shimbun in a column Wednesday described that Takeo Kawamura, a senior member of the Japan-Korea Parliamentarians’ Union and a lawmaker of Japan’s ruling Liberal Democratic Party, met with Abe at the prime minister’s residence last week on Nov. 20.

Abe was quoted as saying that “it would be good” if the process could take place before the Japanese companies’ seized assets in Korea are converted to cash.