At age 34, Park Chul-woo of the Daejeon Samsung Fire & Marine Insurance Bluefangs may be edging closer to retirement, but his performance this season proves that he’s not ready to leave the court just yet. 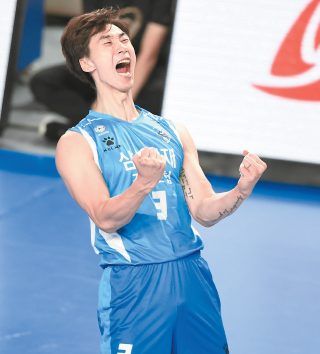 Park scored 230 points in the first 12 matches in the 2019-20 season, good enough to be ranked third in the league. But among the Korean players, his numbers put him at the top of the standing.

When the Bluefangs lost foreign player Andrea Santangelo at the beginning on the season due to an ankle injury, they were expected to end up in the bottom rungs of the Korean Volleyball Federation (KOVO) standing. But thanks to Park’s performance, the Bluefangs are hanging on in fourth place, picking up six wins and six losses, totaling 20 points, as of Wednesday.

“I was surprised when I checked my individual statistics,” Park said on Sunday. “Since my ankle isn’t too good, I wasn’t really able to play much in the two recent matches. So I was really surprised to see my name still ranked third in scoring. This is probably the first time since my debut in 2004 that I’ve scored this many points in the beginning of the season.”

At this pace, Park is well on track to set his personal best record in single-season points. His current record is 592 during the 2009-10 season.

“Even if I play in all the games, it’s not an easy number,” Park said.

Park’s success as opposite is rather unexpected this season, as he was preparing to be a center instead. Since opposites are required to jump and spike a lot, a lot of the players who play this position tend to retire early, in their early 30s.

Due to this, at 34, Park also came to the conclusion that he can no longer play full-time as an opposite. Before the season started, he told Bluefangs’ head coach Shin Jin-sik, “We’ve selected foreign players who can play left just because of me. But I think it’s time to find a right. I’ll look for a position that I can play for the team.”

Following a talk, Shin and the Bluefangs signed Santangelo, who plays opposite, and Park started training to be the Bluefangs’ center. However, as Santangelo was injured, Park’s new position was postponed, and he had to continue playing opposite.

Park is now back playing center as Santangelo seems to have recovered. Although Park hasn’t fully adjusted to his new position, he still did well, as he managed to score four points in two matches.

“I briefly played as a center back in middle school because I was tall,” Park said. “This is the first time in 20 years for me to play as center. It feels like I’m starting volleyball all over again. Since there aren’t that many left-handed centers, a lot of the people around me were worried about my position change. I want to be remembered as Park Chul-woo, the volleyball player, not Park Chul-woo, who plays right. I can challenge myself to play in any position for the team.”

As Park transformed into the Bluefangs’ new center, he is reminding himself more of the advice he received from Shin Chi-yong, the head of the National Training Center and Park’s father-in-law.

Park may no longer be playing for big points, but he is happy to put the team’s success first. During the Bluefangs’ match against the Cheonan Hyundai Capital Services Skywalkers on Nov. 21, Park only scored one point, but the Bluefangs still won the match 3-1.

“[Shin] told me that when I’m making a decision, I should only think about what I should do for the team,” Park said. “He also said that if I started thinking about my own ambition or my relationship with others, the team would fall apart. So I’m only thinking about our team winning. It made me feel a lot happier when our team won by having me play as a center and only score one point than our team lose even after I scored 30 points as a right.”

Looking at Park’s career, he’s set quite a record in the KOVO. Back in 2010, when the Bluefangs played against LIG, now the Uijeongbu KB Insurance Stars, Park scored 50 points by himself, the most points scored by a single player in a game in the men’s league history. Last season, he became the first-ever male player in the KOVO to reach a career 5,000 points.

However, as he will now play as center, he will have to take a step back from the scoring records. Rather, Park’s new goal is to play volleyball for as long as possible.

“I don’t have much ambition when it comes to records,” Park said. “I’m back to zero. My biggest joy is to not cause any harm to the team and instead help them. Volleyball is more fun than back when I was in my 20s.

“As I get older, I’m gaining more confidence. Maybe, I should try until I’m 40?”