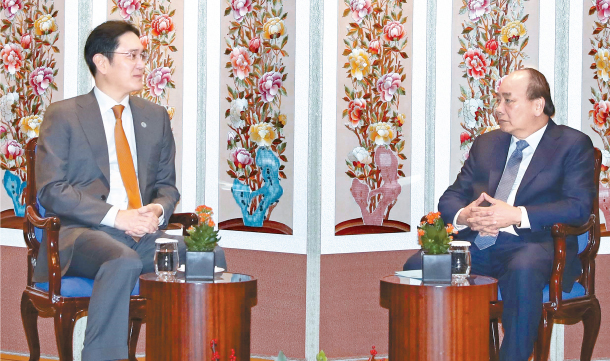 The chiefs of Samsung Electronics and Hyundai Motor and other Korean business leaders discussed investment and business plans on Thursday with Vietnamese Prime Minister Nguyen Xuan Phuc as the groups compete for a stronger position in the broader Southeast Asian market.

“Vice Chairman Lee explained Samsung’s business strategy in Vietnam and thanked the Vietnamese government for its support,” a source at the company said, while declining to comment on the specific topics of the discussion.

In making the request, Nguyen likely offered a wide range of incentives including a tariff cut.

Lee reportedly said that the electronics company is in need of considerable human resources, as reflected in its plan to hire 3,000 engineers for a new research and development center in Hanoi, Vietnam.

Vietnam is considered a primary production hub for Asia as Samsung’s smartphone factory there covers more than half of its global production, at 160 million units.

The meeting was made on the sidelines of a forum hosted by the Federation of Korean Industries, one of the leading business lobbying groups, and follows a closed-door discussion with Nguyen during Lee’s visit to Vietnam last October.

The heads of Samsung’s affiliates - Samsung Electro-Mechanics CEO Lee Yun-tae and Samsung Display CEO Lee Dong-hoon - joined the meeting, though the Samsung Electronics’ Koh Dong-jin could not make it due to another schedule.

With few details unveiled, Chung told reporters that “the atmosphere was great” after the private meeting that also included Kong Young-woon, president and director in charge of the strategy planning division at Hyundai Motor.

At the forum, GS Group Chairman Huh Chang-soo, who also heads the lobbying group, called for a closer tie in trading, setting $100 billion as the goal.

“The bilateral trade between the two nations increased almost 100 times after forming trade relations, and the trading volume hit a record high at $68.3 billion last year,” Huh said. “Let’s pave the way for an era of $100 billion.”

Other leaders from GS affiliates including Huh Myung-soo, vice chairman of GS Engineering & Construction, and Lim Byung-yong, CEO of the construction company, also met with Nguyen.