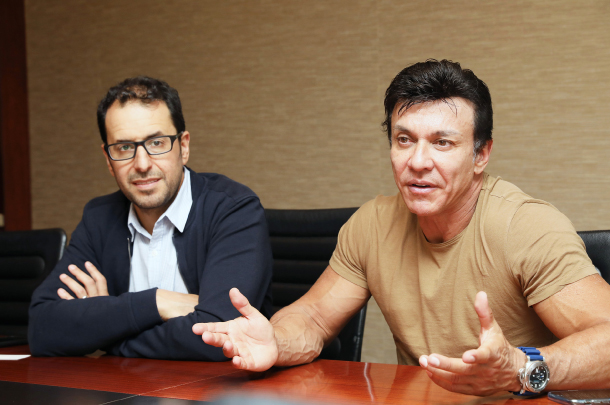 Two of the three co-founders of Zumba, Alberto Perlman on the left and Alberto Perez, talking passionately about their work during an interview. [ZIN ACADEMY KOREA]

“Hey class, today we’re going to learn something new. I prepared this class for a long time, and I think you’re going to like it,” Alberto “Beto” Perez told his aerobics class in Cali, Columbia, one day when he left his regular music at home.

Desperately, he searched around in his bag for anything else and located some salsa and merengue tapes. He nonchalantly said to the class that they were going to learn new choreography and improvised for an hour. The class left the room with smiles on their faces - they loved the new dance.

That was the birth of Zumba. Perez was 17 years old at the time.

Perez was a natural prodigy. He was inspired to dance after watching the film “Grease” (1978) and began working as an aerobics instructor from age 15.

Due to his talent, Perez quickly became a somebody in Columbia, but he wanted more. He had an “American dream” and wanted to make a name for himself in the United States, which is why he moved to Miami. According to Perez, he thought Miami was “the perfect combination of warm weather, Caribbean sea and Latin people influencing the diverse aspects of American culture.”

He started with nothing, but he managed get work in a fitness center from 2000, and his reputation spread by word-of-mouth. The mother of his future business partner, Alberto Perlman, was one of his students.

Perlman was working in an entirely different field before he met Perez. He was employed at a tech company when everybody was starting dot-coms. He developed internet businesses in Latin America, but in 2000, the dot-com bubble burst, and he soon became a jobless 23-year-old.

One day, he was having a dinner with his parents, and everyone was talking about Perez’s class. Suddenly his mother turns to him and said, “Why don’t you start a gym with Alberto? He already has so many students!”

Perlman heard so much about Perez that he finally decided to meet the guy - and when he saw Perez’s class, he was completely won over.

“When I went to see the class, I saw every single person in the room was smiling during the class and drenched in sweat,” said Perlman. “It was a powerful class, but it was also a class that was making people happy. Usually, people are happy after the workout. [But in this class,] they were happy during the workout, so I felt like this was the magic pill that everybody was waiting for. It was a workout that people wanted to do instead of a workout people have to do. So I said to Perez, ‘Let’s do this.’”

However, the two Albertos did not have any money (the three co-founders of Zumba are all Albertos - Alberto Aghion had worked with Perlman previously). Perez asked, “Got any money?” and Perlman replied “No.”

“So we shook hands and said ‘We’ll figure it out.’ That was the beginning,” Perlman said.

Although the co-founders of the Zumba empire now sit atop of the fitness world with over 15 million global Zumba participants working out every week in 186 countries, they had tough moments. When they were starting to raise money in 2001, Sept. 11 happened, and all the investors dropped out.

But it was the first few hundred instructors and students that kept them going and boosted their confidence when gyms kept turning them down.

“They were the ones that told us, ‘This is amazing, keep it up, and please don’t take this away from us,’” Perlman reminisces. “When you know the product is good, you’ll find a path.”

Now, Zumba has hundreds of instructors who communicate with ZIN, short for Zumba Instructors Network.

“People who were either Zumba students or instructors would tell us that they were able to change their life because of Zumba, whether it was losing weight or something bigger like fighting depression,” Perez proudly said.

The Korea JoongAng Daily interviewed the two co-founders of Zumba as they visited Korea on their world tour to discuss the secret of their success. The following are edited excerpts. 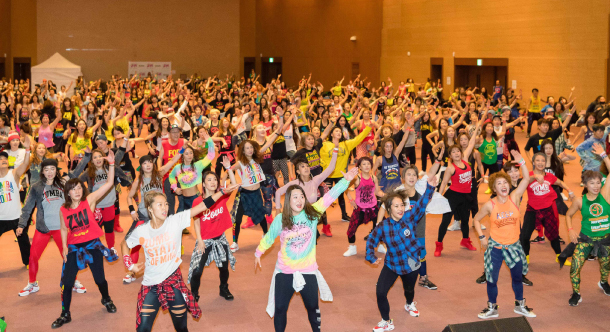 A snapshot of ZIN (Zumba Instructors Network) members in Korea learning new dance choreography and music from Perez when he visited the country on his world tour from Nov. 23 to 24. [ZUMBA]

Q. Why do you think Zumba resonates with people, transcending cultures and age groups all over the world for more than a decade?

A. Perez: I think the fitness industry for the last 20 years has forgotten that regular people come to the gym - mothers, journalists, students. In the industry there are always people who create complicated choreographies and steps. I think Zumba is fun, easy and effective but with amazing music to bring the party in the clubs to the aerobics room.

Ninety percent of people hate exercises. People think exercise is boring - it’s all about diet and discipline. But with Zumba, all you have to do is have fun.

Most fitness programs we do remain in the physical benefit space. [They say] this is the best fitness for your legs, and they focus on losing weight or looking sexy, only focusing on what people need to gain approval - you lose weight, you look sexy. They do it for other people.

The emotional benefit of Zumba is joy and happiness. The social benefit is that people come together in communities more than any other classes. They laugh, dance and have fun together. They go have coffee after Zumba class all together. My mom’s best friends are all from Zumba.

[Until now] we only found one other program that fit those three things, and it was yoga. There was physical benefit, there was emotional zen balance and the community. We also named it. We would call it FEJ, short for Freeing Electrifying Joy, and it’s that moment when people forget everything that happened during their day and just lose themselves in the music.

We [also] have our Zumba community, and [within that community] there are many circles, such as groups of instructors, the master instructors, the students and the people who go to Zumba events, and that created so many layers of communities.

How do you design the choreographies? Do you have certain standards that you stick to?

The music we use in class has different beats: merengue, Cha Cha Cha, reggaeton, salsa and belly dance, et cetera. I design classes in the intermittent workout, [which has a] series of high interval training, but it’s with music. With music, people don’t feel that they are here to burn calories.

They smile during classes because they feel active, more sexy and more happy, while people make friends. Something happens during the class that makes people happy, and that’s why all the benefits that Zumba bring are positive.

Perlman: There are basic rules but not choreographies. There are certain steps that you’d see over and over again that are very simple and easy to follow, but they’re like building blocks of Lego, so you take different steps, and that becomes the foundation of the song. Based on that, Perez uses different elements in the song to add spice to it.

I’ve heard that you personally choose the songs that licensed instructors receive every month along with their choreographies [received every other month] to use in their class materials.

Perlman: So the only meeting the three Albertos have is the music meeting, and that’s held every month. The three of us hear music with our creative music director, and we hear the music we send out to instructors. And [some of them] are personally from famous artists. Artists send us the music before it comes out and tell us “Hey, I’m going to launch this song in two months, and can you put it in Zumba?” because they know another 15 million people will dance to that song. So that’s how we choose the music, and different instructors work on the choreography with Perez, and he looks at every single choreography [before] the video is given to instructors.

So the instructors get every other month the video where they learn 13 to14 new songs, and they get the audio for the songs [as well] so they can build them into their playlist.

Perez: It’s a big process. Before the meeting, I need to hear about 200 songs, and I filter the songs. Finally, in the meeting, we hear 20 songs and make the decision to choose the 14 songs for instructor. Only the licensed instructors get this choreography and the music that matches it. [We have also] built this app “ZIN Play” that allows the instructors to cross date the songs together, adding sound effects, and it [basically] allows them to be like D.J.s.

Zincon is known to be the only annual fitness concert in the world. How did Zincon start?

Perez: At the beginning, when I worked in Miami, I tried to go to the conventions and they were so boring, academic. Waking up at seven in the morning, and I was like “How come you don’t sleep? Why don’t you start at nine?” and I wanted to create a fun convention to go to. I’ve been to lots of the best fitness conventions, but the most fun one is ours. It’s like a party for four days like Tomorrowland - almost like a music festival and fitness convention at the same time.

In other interviews, you’ve mentioned that the company is still growing at a rapid speed in countries such as Korea and Indonesia. How fast are we growing?

Perlman: Korea is one of the fastest. Since we came here five years ago, there are 10 times the number of instructors. We have half a million people taking Zumba classes in Korea, which means there’s half a million Koreans dancing Zumba every single week. That’s a lot of people. That’s why Korea is such a focus country for us, and we should be present in most gyms in Korea. Probably 60 to 70 percent of the gyms would have Zumba class. That’s where you’ll feel it. We also have some surprises coming up next year where we’ll be working with Korean music. We can’t say which one though.