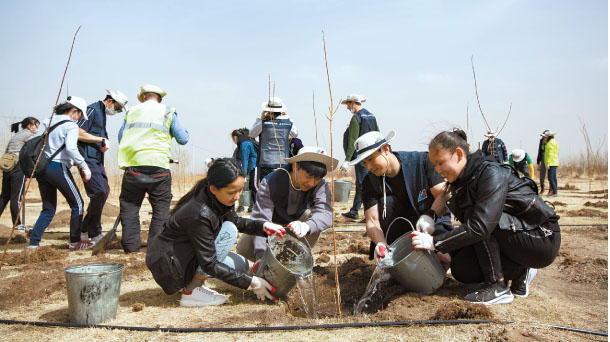 Korean Air’s employees are voluntarily carrying out a range of projects to give back to the community.

Around 4,000 employees from the airline took part in 26 volunteer groups within the company.

Korean Air has been running the Global Planting Project in Mongolia and China to protect the environment.

This year, an additional 5,000 maple trees have been planted by 120 Korean Air employees and 30 Delta Air Lines employees along with around 200 locals.

Korean Air has been planting trees in the Kubuqi Desert in China since 2007, along with its employees and Chinese students.

There are about 1.43 million trees now growing within the Korean Air forest in the desert.

The forest is expected to work as a shield in protecting Northeast Asian air from fine dust and yellow dust.

Other corporate social programs run by Korean Air include providing humanitarian aid when disasters like tsunamis or earthquakes break out.

Korean Air has provided 2,000 boxes of drinking water to the victims of a tsunami that hit Indonesia in December 2018.

Special flights are also flown in times of disaster to provide items such as drinking water and blankets free of charge.

In addition, Korean Air has also provided libraries and bicycles to Vietnamese children to support their education and help them cover the long distances to school.

With such voluntary actions, Korean Air is setting an example for corporate social responsibility and giving back to society.