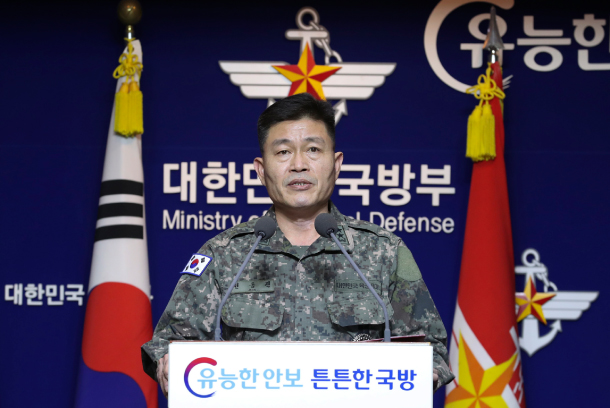 At the Ministry of National Defense on Thursday, Maj. Gen. Jeon Dong-jin of the JCS gives a briefing on two unidentified projectiles fired by North Korea. [YONHAP]

South Korea’s military on Thursday confirmed it had completed an operation to evict a North Korean merchant ship from its waters some 17 hours after the vessel crossed to the southern side of the Northern Limit Line (NLL) the previous day.

However, it took South Korean military authorities nearly six hours to realize the vessel was a North Korean merchant ship sailing on the southern side of the NLL, the de facto maritime border between the two Koreas in the Yellow Sea.

The Joint Chiefs of Staff (JCS) said Wednesday that the 500-ton merchant ship crossed the NLL, northwest of Baengnyeong Island, at around 6:40 a.m. Wednesday.

At one point, the South Korean Navy fired warning shots after the vessel did not respond to multiple warnings it had issued to immediately leave the NLL, in accordance with protocol.

On Thursday, the JCS confirmed that the South Korean Navy guided the merchant ship out of South Korean waters and completed the operation around 11:30 p.m. that night.

South Korean military authorities first detected the North Korean ship through its radar around 5:50 a.m. that day, along with Chinese fishing vessels in waters north of the NLL.

Thus, the military authorities believed the merchant ship was also a fishing vessel.

The North Korean merchant vessel then steered southward crossing the NLL. South Korean military authorities requested some 10 times for the ship to declare its flag, vessel name and destination, but they got no response.

A South Korean Navy escort ship eventually neared the vessel and checked the International Maritime Organization identification number on the window of the wheelhouse to finally identify it as a North Korean merchant ship.

This identification took place around 12:30 p.m., some five hours and 20 minutes after the vessel first crossed over to south of the NLL, which such vessels are not allowed to do.

Finally, the North Korean sailors responded and explained they were returning to Haeju in North Korea’s western South Hwanghae Province because the vessel was facing “engine problems and bad weather.” They were escorted by the South’s Navy until they left the NLL at 11:30 that night.

A South Korean military official requesting anonymity said, “If the North Korean merchant ship was on its way to Haeju, it had to follow the coastline of Hwanghae Province. Instead, it chose to take a detour in the Yellow Sea. The condition of the vessel wasn’t good, so its intention for crossing over the NLL twice is suspicious.”

Some analysts point out that North Korea may be testing out the South’s reaction as it tries to neutralize the NLL.

The military official maintains that the ship “accidentally crossed the NLL due to engine trouble,” but the South Korean military authorities didn’t check the North Korean vessel’s engine themselves.

Also on Thursday, North Korea fired two unidentified projectiles, South Korea’s JCS said. They were fired at around 5 p.m. eastward from Yeonpo, South Hamgyong Province, and both flew around 380 kilometers (236 miles) and reached a maximum altitude of around 97 kilometers. It marked the 13th time Pyongyang carried out a weapons test this year.

The JCS expressed “strong regret” and said it is “monitoring for additional launches and maintaining a readiness posture.”