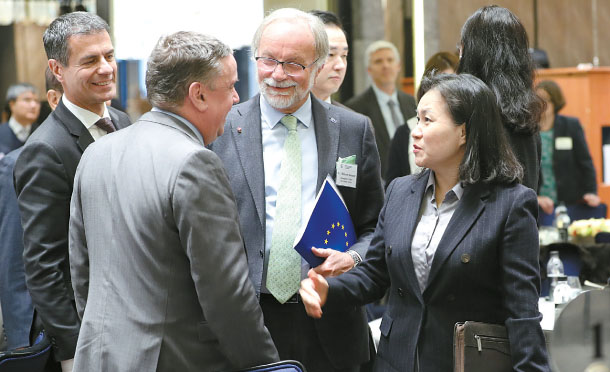 “Korea-specific” business regulations still need to be addressed for the country to get closer to global standards, the European Chamber of Commerce in Korea (ECCK) said Friday.

This year, the group suggested 180 reforms based on reports from corporate members in 20 industries.

Since 2015, the ECCK has annually published a white paper that collects suggestions and delivers them to the government. Last year, it made 123 recommendations - all of which received feedback from the government, 40 percent of which were positive.

“In Korea, there are still many cases where rules and regulations that affect foreign and domestic businesses change too quickly without adequate input from stakeholders,” said ECCK Chairman and Mercedes-Benz Korea CEO Dimitris Psillakis during a press event held Friday in central Seoul.

Committee heads representing different industries were present at the event as well to introduce specific issues they were facing in business.

“Often Korean regulations and standards are very different from global standards. This has an effect on all of us,” said Karsten Kuehme, Nestle Korea CEO and the head of ECCK’s food committee.

For example, Korea has stricter standards in the labeling of “natural ingredients.” This results in foreign companies finding ways to downgrade the product sold in Korea or invest money to look for alternative methods, which in turn raises the price.

Julien Samson, general manager of GSK Korea and head of ECCK’s health care committee, argued that regulations in the sector needed to modernize faster to align with global standards.

“What we are seeing is a big risk - Korea is falling behind other countries on these topics - especially China,” he said. “When you look at research and development, China has made progress this year while Korea is declining at the same time. It’s a source of concern for us.”

According to Samson, more than 650 clinical trials were approved and conducted in China this year. Korea, on the other hand, did a little more than 200, down from last year’s 318.

Punishments for business-related infractions are out of line with international standards. For example, Korea imposes criminal penalties on matters like certification, said Andrew Kim, director of external affairs at Mercedez-Benz Korea and head of ECCK’s passenger vehicles committee.

On Friday, the ECCK met with the Ministry of Industry, Trade and Energy to discuss cooperation.

“The Korean government will continue efforts to reform regulations so that foreign invested companies can contribute to the country’s innovation and growth,” said Trade Minister Yoo Myung-hee.