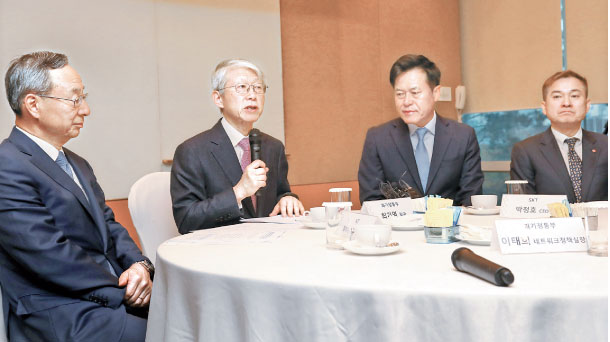 5G phone plans are too expensive, the government claims, appealing to the providers to reduce the rates they charge for the service.

On Friday, Minister of Science and ICT Choi Ki-young met with heads of Korea’s three major mobile carriers and asked them to consider making subscriptions cheaper.

“Please consider offering low-priced 5G phone plans so various groups of consumers can use the service,” Choi said during the discussions.

It is the first time Choi met officially with the chiefs of SK Telecom, KT and LG U+ after his inauguration as minister in September.

According to the Science Ministry, the number of 5G subscribers broke 4 million on Nov. 2, about seven months after sales of the high-speed service began in Korea.

Choi’s words did not have much of an effect. The chief executives - Park Jung-ho of SK Telecom, Hwang Chang-gyu of KT and Ha Hyun-hwoi of LG U+ - said it would be difficult to discount the plans.

They cited the heavy investments they have made in 5G infrastructure and countered with an offer to improve benefits offered to customers. Their first priority is to expand the customer base.

No exact definition exists for low cost, but Choi offered less than 40,000 won ($34) per month as a good benchmark.

“Around that much would be about right,” he said.

5G phone plans from the three carriers start from about 55,000 won per month, though LG U+ is offering 45,000-won plans only for teenagers and customers aged 65 or older.

SK Telecom’s Park said it is still too early to discuss cheaper plans as heavy investment is still being committed as the networks are being built out.

Minister Choi also asked carriers to work with phone makers so that cheaper 5G-enabled smartphones could be released.

Currently most of the 5G-enabled phones are high-end flagship models costing over 1 million won. The company chiefs said they have been asking phone makers to come up with more affordable device options.

The carriers have been offering 5G service at 3.5 gigahertz and are developing technologies to commercialize 5G services at 28 gigahertz. The CEOs said it is taking longer because network equipment as well as software and phones must all be ready.

This year, the three carriers released plans to invest some 8.2 trillion won into 5G services, which is a 50 percent increase compared to last year, according to the Science Ministry. As of September, the carriers had invested 5.4 trillion won, and by the end of the year, the total investment may break the proposed target, the ministry said in a statement.

The three CEOs asked for the government’s support in expanding investment in 5G, and Choi said the ministry and the National Assembly are trying to lower the tax burden for companies building out 5G infrastructure.