When Yoo Jeong-min returned to Korea after living in Sydney for four years, one of his main priorities was finding the right school to enroll his children in.

Yoo said he wanted his children to receive a proper moral education rather than suffer from academic stress. After much consideration, he picked Daejeon Seonhwa Elementary School. 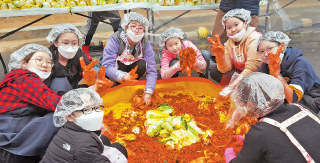 “Although I don’t have any connection with Dajeon, I just moved because I liked the school,” Yoo said. “My children like going to school more now than when we were living in Sydney as their new school provides the perfect place for a good experience and allows them to have good relationships with their friends.”

But it’s not just Yoo and his kids that think the school is doing something right.

Seonhwa Elementary School was awarded the top prize in the group category at the 7th Korea Character Education Awards 2019 held at the AW Convention Center in Jongno District, central Seoul, on Nov. 19. The event, co-hosted by the Ministry of Education, the Ministry of Gender Equality and Family and the JoongAng Ilbo and co-organized by the Korean Educational Development Institute and the Korea Youth Work Agency, was aimed at encouraging and rewarding individual, groups and schools, who contributed to the practice of moral education in society, family, and school.

The elementary school began to focus on moral education in 2016.

“Many people consider morals nothing more than good deeds. However, our school expanded its concept and started focusing on building relationships,” said Lee Min, principal of Seonhwa Elementary School in Daejeon.

The school’s moral education has three stages. The first stage is “a relationship with oneself.” The school helps the students to look after themselves and recognize how well each of them fit virtues such as courage, sincerity, self-reflection and self-control. The students also examine themselves using a checklist that the teachers have developed. The second stage is “building a relationship with others.” The students receive education on how to respect and show consideration to their friends, families and teachers. The last stage is “building our relationship.” By participating in community services, the students learn responsibility, cooperation and elements of abiding by the law.

“We didn’t arrange a specific time to give moral education but teach the students during class hours, but, I think this way is more effective,” said Lee. For instance, if the topic is “helping neighbors in need,” the students learn the concept of consideration and caring during a literature class. After the classes, students visit the nearby community center and participate in making kimchi and then deliver the handmade kimchi to elderly people who live alone.

“When I gave an old man the kimchi I made, he really liked it and said thank you,” sixth-grade student Kim So-eun said. “I felt like I was a great person.”

“The school is a little different from others,” another sixth-grade student, Ahn Hyo-jin, who transferred to Seonhwa Elementary School when she was in the second grade, said. “When I was in a different school, we talked to teachers and parents immediately whenever a problem occurred. However, the students in this school put their heads together to solve a problem [before they talk to the teachers].”

Another award recipient in the individual category was Choi Min-jeong, a counselor from the Gyeongsangnam-do Youth Support Foundation. Choi provides moral education to young people and soldiers by offering individual consultations. She created her own way of providing moral education using conversational methods with individuals and groups.

“Although many schools and organizations have programs for moral education, it would not work properly unless they stop managing them mechanically. The most important thing is to encourage the students’ participation,” Choi said. “People can be free from feeling guilt or resentment through consultations. I’ve been spreading my own way of providing moral education through public lectures and been applying it to my consultations as well.”