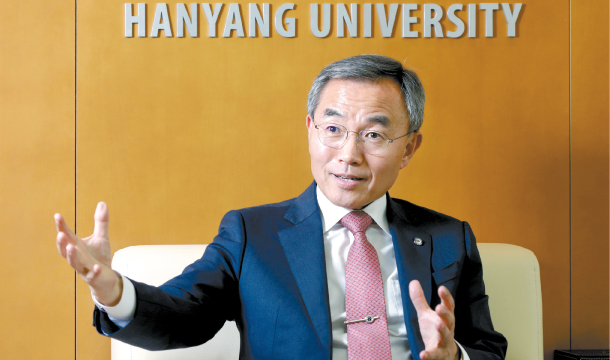 Kim Woo-seung, president of Hanyang University, talks about the importance of cooperation between the university and industries during a recent interview with the JoongAng Sunday in Seongdong District, eastern Seoul. [KIM KYUNG-BIN]

The president of Hanyang University thinks partnering with industries can offer a major breakthrough in solving schools’ financial difficulties.

In particular, he cited technology transfer income as the main factor at play in these beneficial relationships.

When companies employ newly discovered information from universities in their products or services, they then distribute some of the profit they earn back to the school. This is called technology transfer income and is how a university can make money through cooperation with industries.

According to data collected by the JoongAng Ilbo’s comprehensive university assessment team, the total amount of technology transfer income that 61 four-year universities earned in 2018 was around 70.2 billion won ($59.6 million). Princeton University in the United States alone earned about 156 billion won in 2015.

Princeton University has been cashing in on its late chemistry professor Edward Taylor’s research that led to the development of the anti-cancer drug Alimta in cooperation with the pharmaceutical company Eli Lilly in 1984.

“The universities should take a central role in cooperation with companies by strengthening connectivity between society and industries,” said Kim.

Kim received a bachelor’s degree in mechanical engineering from Hanyang University and was a former vice president of the Erica campus, its satellite campus in Asan, Gyeonggi.

The JoongAng Sunday recently sat down with Kim at the university’s main campus in Seongdong District, eastern Seoul.

Q. Why do you think cooperation between universities and industries is important?

Hanyang University graduates have been very successful with their start-ups. Can you tell us more about these ventures?

A total of 10,213 companies have been founded and run by our graduates. According to Korea Enterprise Data, these companies hired about 720,000 employees and had a total annual value of 573 trillion won last year, which is 33.1 percent of Korea’s GDP. Of all the start-ups that were established less than seven years ago, 2,153 were created by Hanyang University graduates. Start-up is our tradition.

Hanyang University has ranked third in the JoongAng Ilbo comprehensive university assessment rankings for 2019. The Seoul campus has even ranked first in the student achievement category, which evaluates students’ employment rate, start-ups, etc. Do students realize these rankings?

Hanyang University students of the Seoul and Erica campuses might not be able to believe their schools’ rankings, which are third and sixth respectively. Maybe this is because of the hierarchical ranking structure in the Korean higher education market that has existed for a long time. However, Hanyang University tries to provide students with something clear. We can promise that we will educate students on job performance abilities relating to their major fields of study and even train them to be people who practice “Love in Deed and Truth,” which is the founding principle of our school.

What are job performance abilities that students need?

They are knowledge and experience that industries or society want students to have. There are so many graduates who don’t really know what they learned during their four years of university. Our school will not produce students like that.

Do you have any specific plans to foster students’ job performance abilities in a way that industries and society want?

Many companies including Renault Samsung Motors, Kia Motors and Pulmuone participate in the process of designing our class programs. They help us make education curricula, set topics for courses and evaluate the students’ final results. We call these kinds of classes “Industry-Coupled Project (Problem)-Based Learning (IC-PBL).” I first started this program on the Erica campus in 2017 when I was the vice president of the university. For example, Kia Motors participated in one of our school’s business administration department’s courses and allowed students opportunities to experience real company tasks.

What inspired you to make IC-PBL courses?

Of the few terms that can represent the fourth industrial revolution period, “hyperconnectivity,” “super fusion” and “super intelligence” are definitely key. To adapt in the fourth industrial revolution period, students need to have four professional abilities: critical thinking, creativity, cooperation and communication. The reason why our university developed IC-PBL is to cultivate leaders who have these four abilities.

According to course satisfaction surveys, our students are more satisfied with their courses since the implementation of the IC-PBL program. Also, over 130 universities and educational institutions asked for our IC-PBL material to benchmark the system. We earned about 30 million won so far through some educational programs run by the IC-PBL center as it can be applied to not only the engineering field but also humanities and social science.

Hanyang University students map out their career paths and lay out their visions for the future in their freshmen year. From next year, the school will provide students teachings that are closely related to social problems. Also, the students are given opportunities to work in some big companies including Posco, SK Hynix and Lotte Chemical.

Don’t you think the role of professors should be changed as well?

Our students are living in the age of centenarians. They would not be able to live their lives wisely if they only accept knowledge that professors teach. We are living in an era where we can search anything about the world through the internet. The universities need to free themselves from delivering limited knowledge to students. Just like the quote “Less teaching, more coaching,” professors must take a role of a guide who can pique the students’ intellectual curiosity so they will be capable of studying by themselves. Our professors are being very responsive to these changes.

If there were anything that you were hoping for from the JoongAng Ilbo’s comprehensive university assessment ranking, which marked its 26th this year, what would it be?

In the past, the issues of how many papers were written by professors and how many times they were quoted in academic journals were important criteria. However, now, it’s time to consider the universities’ impact on society. The knowledge and technology that professors developed through their research must have influence on our society and industries as well. I hope the JoongAng Ilbo’s assessment will be supportive about this and allow professors to become influential by communicating with industries and society.