Some trucks and buses are parked near a facility that tests engine combustion in Dongchang-ri in North Pyongan Province, North Korea, on Nov. 1. [SCREEN CAPTURE FROM GOOGLE EARTH]

Frequent movements of trucks have been recently detected at a rocket launch site in North Korea, a sign that Pyongyang may be preparing another long-range missile test.

“North Korea appeared to have renovated its missile-related facilities in Dongchang-ri [in Cholsan County of North Pyongan Province] earlier in the year,” a high-ranking official in the South Korean government told the JoongAng Ilbo on Friday. “And recently, we detected an increase in the movement of vehicles in the area.”

At least four vehicles including buses and trucks were spotted in a parking lot near a facility that tests engine combustion in a satellite image of the site on Nov. 1 provided by Google Earth.

“There is a facility used for testing engine combustion in the area, and we detected small buses and trucks coming and going there,” the official said. “The North may not be ready to test a missile immediately, but we see these as signs that it is getting ready for one.” 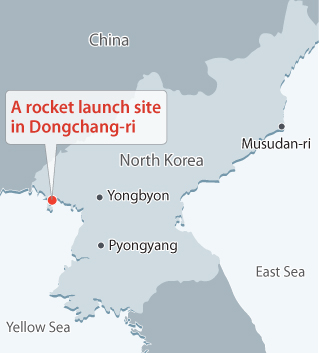 It has been a practice of the North to conduct a test on the thrust power of an engine prior to a long-range missile test, including that of intercontinental ballistic missiles (ICBMs).

North Korea’s most recent rocket launch was Thursday, when it fired two unidentified projectiles into the sea off its east coast from Yeonpo, South Hamgyong Province. It was the 13th time Pyongyang carried out a weapons test this year.

The launch coincided with the U.S. deployment of an RC-135V reconnaissance plane over Gyeonggi and Seoul on Wednesday and an E-8C and EP-3E on Thursday, according to Aircraft Spots, marking a rare occasion for the United States to dispatch three reconnaissance planes consecutively in a short period of time.

“It was a rarity to see reconnaissance planes three times in a row within the two days,” an official of the Ministry of National Defense of South Korea told the JoongAng Ilbo, adding that it may have been a warning signal from the United States to the North regarding missile tests.

EP-3E planes are equipped with devices that can pick up waves emitted from radar of a launch vehicle or from the missile itself. E-8C planes can inspect around 600 targets on land while flying up to 10 hours, according to the official.

Although unusual, it is not the first time the United States has deployed these reconnaissance planes - they have been dispatched immediately before or after a missile test by the North before, including on Oct. 5, a few days after the North test-fired what it called a new type of submarine-launched ballistic missile, and in November 2017, when the North test-fired the Hwasong-15 ICBM.